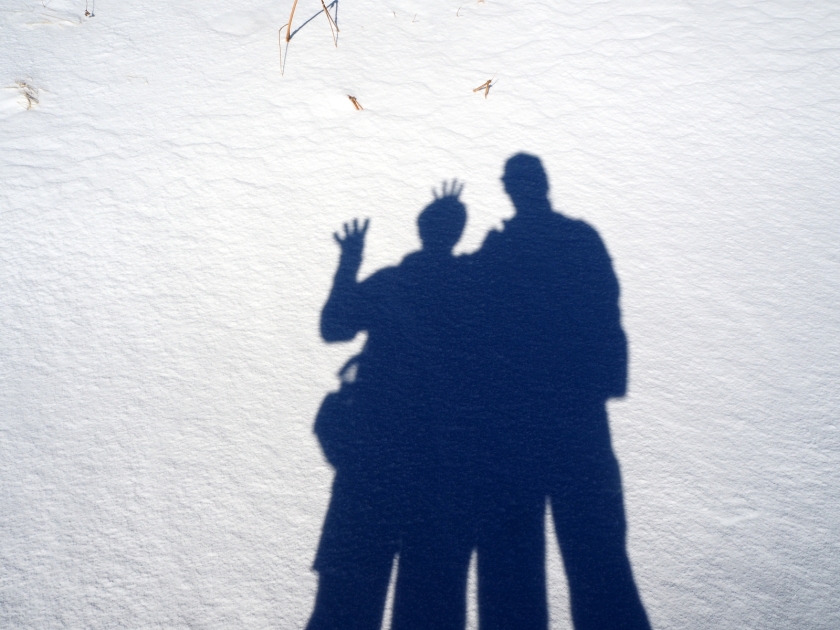 The Mount Ashland Ski Area opened last week, with about 24 inches of snow on its upper slopes.  Our one (and only) snowshoe last winter had been a flounder-fest to the top of Mount Ashland through snow too soft and thin to keep us out of the underlying brush. We ended-up shuffling back along the plowed road. 😥 So, would there be enough snow lower down to support an out-and-back snowshoe to the Grouse Gap Shelter? Only field work could address this conundrum. Throwing the shoes and poles in the truck, we drove up to the Mount Ashland Sno-Park.  As soon as we got there, it was apparent that: (a) the snow was (again) too thin to keep us out of the brush if we tried going cross-country with snowshoes, (b) skiing would have been fun if we still had our Nordic skis, and (c) we could easily walk to the shelter without snowshoes.  So we had a nice five-mile walk out to the shelter and back along Forest Road 20 in weather that would have been perfect if clouds hadn’t blocked our view of Mount Shasta.  We also had the rare experience of ours being the only tracks in the snow for the last half-mile to the shelter!

When we got to the shelter we found that douchbags 👿 had dumped piles of trash in it – way more than we could haul out in our packs. 😦  People that do this are either used to wallowing in piles of trash, too stupid to find a garbage can, believe they are “entitled” to have someone else clean-up after them, or all of the above.  We assume the Forest Service will eventually come out and excavate this mess, thereby putting our tax dollars to work pampering idiots. 🙄

After fighting off having this garbage pile buzzkill our day, we headed back. Weather conditions remained full bluebird until just before the Sno-Park. Then the boiling pack of clouds in the Shasta Valley (that had blocked our view of Shasta for the entire day) managed to get a whiff of vapor as far up as the road. This added a touch of atmospheric complexity to our day. 🙂