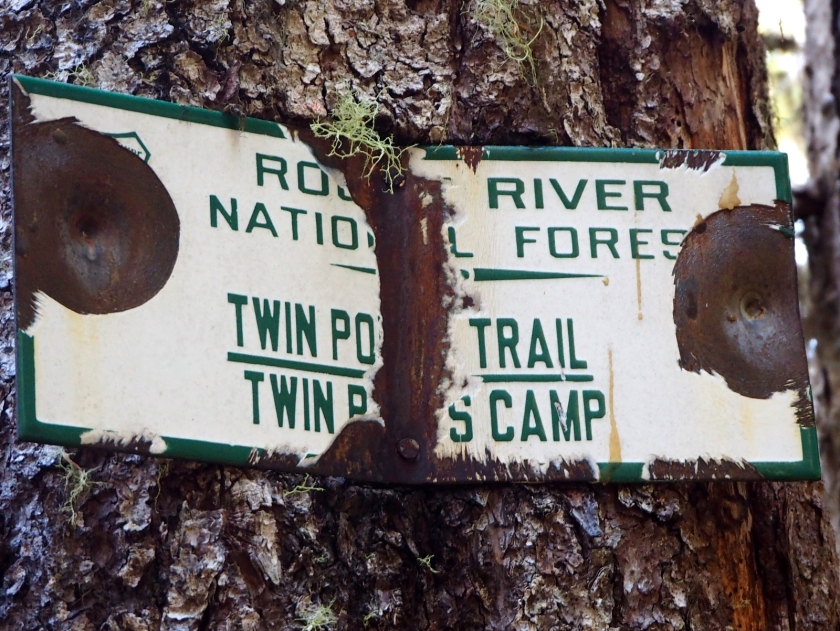 Well, this weekend’s promised storm never arrived and that promise has now been moved to Tuesday or whenever. We have business next week “up north” in the “big city” and The LovedOne went on ahead to troll yarn shops with friends. That left me with a day to fill with – wait for it – hiking! Since the storm never arrived, the high Cascades are still largely devoid of snow. This opened an opportunity to visit one of the more obscure trails on my list – the western end of Twin Ponds Trail #993 in the Sky Lakes Wilderness. The Forest Service lists its usage as light which I’ve learned is code for not much maintained. So, yes, there were some brushy spots, a few small fallen trees to step over or around, and some vague tread. But, overall, it was pretty easy to follow.

Today’s #993 follows the route of the old Rancheria Trail, a Native American travel route between the Rogue and Klamath River valleys. In 1863, the army widened this trail into a military wagon road between Jacksonville and Fort Klamath. It was replaced by the Union Creek Trail in 1865. The portion of the Rancheria Trail that today’s #993 follows is listed on the National Register of Historic Places. It’s said that some segments of this old wagon route are still visible to the discerning eye. Well, I may have seen a couple of short stretches that looked like a much faded road – or it could just have been wishful thinking. Although the Twin Ponds Trail connects to the Pacific Crest Trail (PCT), it’s not nearly as convenient a connection as the one from Fourmile Lake. These days the #993 seems to be used mostly by hunters.

It hasn’t rained here in weeks but there was enough dew on the encroaching vegetation to thoroughly soak me from the waist down. 😦

As almost all of the trail is through mature forest, and thus largely viewless, the visual highlights are the Twin Ponds and Summit Lake. The northern pond still had enough water to qualify as a pond, while the southern one had shrunk to barely a large puddle. As I followed up along Fourbit Creek it didn’t occur to me that a waterless creek meant a waterless Summit Lake. But so it was. I was there for the lake but it wasn’t there for me. My guess is that the lake’s bottom is so porous that without replenishment by either rain or snow melt it just drains away.

It’s only a short distance from Summit Lake to the PCT but I decided to call the hike at the lake and head back. There isn’t much color left in the forest at this time of year because, per the way the climate used to be, all this should be blanketed with snow by now. So on the way back I amused myself by looking carefully for little spots of color or texture along the trail.

Not one of the great hikes in this wilderness. But not a bad one either. Still not one I’d do over while there are so many others yet to be done. It was nonetheless a very pleasant way to spend a day in the woods while waiting for winter (which hopefully is more timely than Godot). 🙂