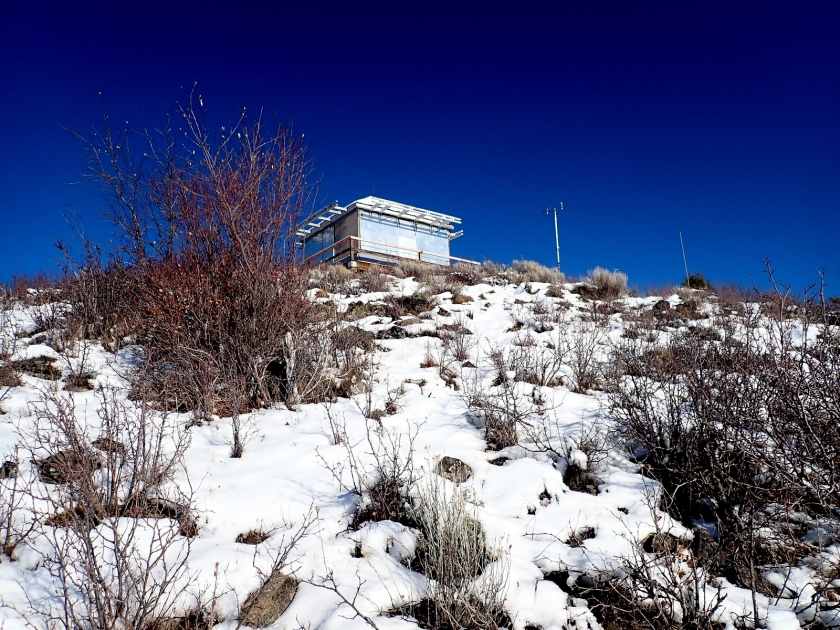 The Little Grayback Trail is one of the classic trails in Southern Oregon. The trail itself runs between French Gulch and Forest Road 2010-340 and offers some good views of the Red Buttes along the way. But for even bigger views, it’s only necessary to extend the hike (on forest roads) for three miles (round-trip) to the lookout (now available for rental) on the summit of Squaw Peak. This makes for an 11 mile round-trip, 1,800 feet of gain, hike, one that seemed perfect as another step up toward “normal” hiking.

The LovedOne, fearing a repeat of the snow slog we’d done to Squaw in December 2015, took a pass on this one. Which was too bad since this December the snow was never more than 4-6 inches deep and deepest only up by the lookout. 😦 An inversion fog was choking the Rogue Valley in gloominess but it was full (but cold) sunshine by the time I reached the lower trailhead on bumpy French Gulch Road.

There are two nice things about this trail. The views start shortly after you leave the trailhead and continue from there.

And it’s on south facing slopes, where the sun’s warmth typically confines any snow to the depths of the side gullies.

As noted, the trail ends at its upper trailhead on a forest road about a mile and a half from the lookout. A walk down these lightly snowed roads got me to the gated road to the lookout and the start of deeper snow cover. But not one deep enough to impede just walking. No matter that it’s only 0.8 miles, the walk up this road is a slog and the most challenging (mentally at least) part of this hike.

But the slog was forgotten as I got to the 360° views from the lookout – which were particularly good on this clear, full bluebird day. 🙂

Thanks to the met station next to the lookout, I knew that it was 41°F, with a 14 mile per hour (mph) breeze, while I sat on the lookout’s steps munching a snack. Very nice. 😎 This station has recorded winds in excess of 100 mph – which might be something to experience, but not today. It was very pleasant lingering on the summit but, too soon, it was time to head back. There was no slogging going down but I wasn’t quick enough to reach French Gulch while the sun still reached it. So it was almost as cold in the gulch as when I’d left. Still, a solid hike on beautiful day in the sun, with views. 😀