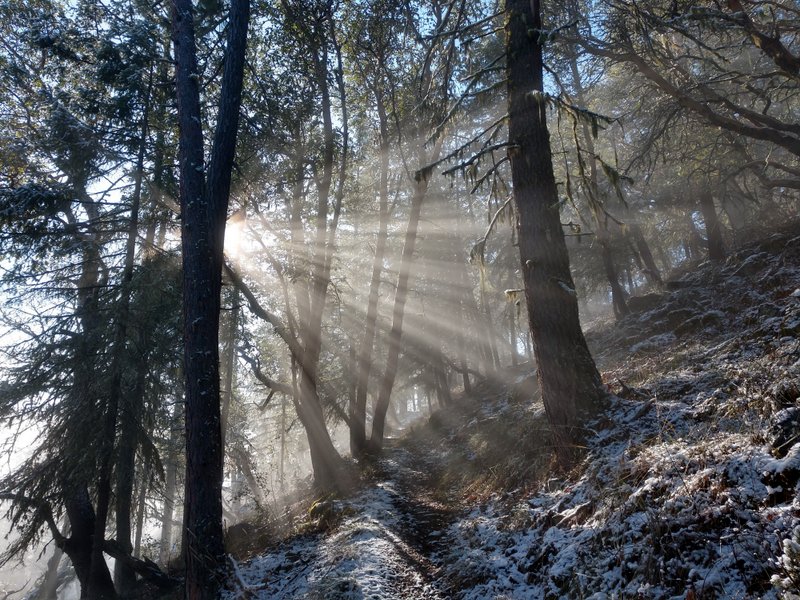 A mild disturbance (Marley’s ghost?) fluttered through the atmosphere last night, leaving behind a light dusting of snow. Not on the valley floor, which was mired in fog, but up on nearby Roxy Ann Peak. Its flanks and summit held out the promise of both snow and sun – if we climbed high enough. So, leaving The Princess (our cat) to further entangle herself in discarded gift wrapping (Pets are such fun! 😉 ), we went in search of a white Christmas. Starting from the upper parking lot in fog, we climbed the snowy Ponderosa Trail to reach sun on the summit, and then descended Tower Road for a fog-shrouded return. We got home to find the wrapping scattered and The Princess hard at work napping, which is her best (and only) trick. A good Christmas was thus had by all! 😀

“But I am sure I have always thought of Christmas time, when it has come round … as a good time; a kind, forgiving, charitable, pleasant time; the only time I know of, in the long calendar of the year, when men and women seem by one consent to open their shut-up hearts freely, and to think of people below them as if they really were fellow-passengers to the grave, and not another race of creatures bound on other journeys.”