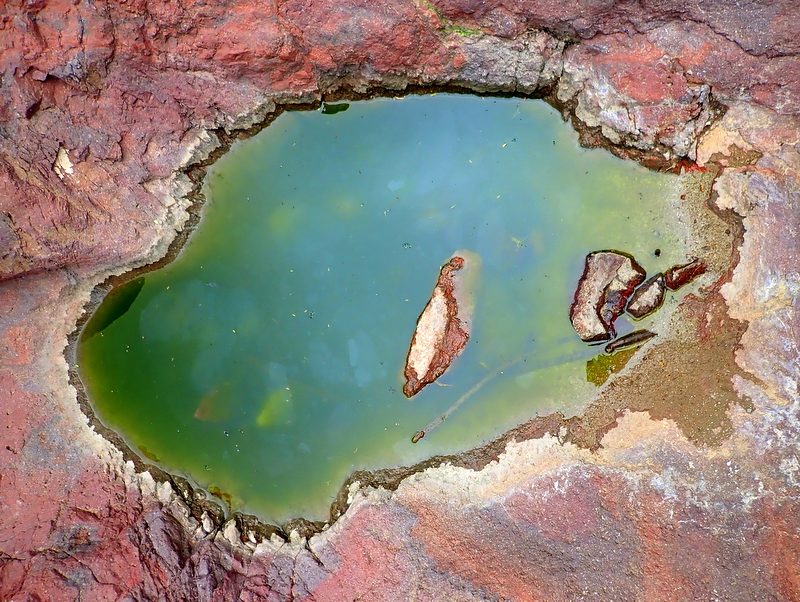 This was our second “make-up” hike in the Las Vegas area – one we’d intended to do last year before fate intervened. This hike, which was billed as a “real adventure,” features slot canyons, a little scrambling, a hot spring, and the Colorado River. What’s not to like? Purely by chance, we went down to the river via the slightly harder side of the loop (Hot Spring Canyon) and returned via the much easier side (White Rock Canyon). A milky overcast once again played havoc with any photo involving the sky but there was enough going on in the canyons to amply compensate for this.

Both the start and the return go along the wide expanse of White Rock Wash, which is braided by use trails (and washed clean after every flash flood). You do NOT want to be doing this hike if rain is anywhere in the forecast.

After about 0.3 miles from the trailhead on US Highway 93, the Hot Spring Canyon Trail climbs up over a ridge and makes a steep descent into the next drainage.

The trail then alternates between short sections of narrow slots and wider patches of wash.

This alternating pattern of slots and washes continued until just before we reached the hot spring. Maybe 100 feet from the spring the canyon abruptly squeezed into a real slot,

and then a trickle of hot water appeared on the floor of the wash; one that was formed into pools by artfully placed sand bags. Here it was boots off for wading. The first pool was very hot (about 120°F/49°C) but the following two were more mellow. None were very deep.

Below the lowest pool is a 20-foot pour-off that you negotiate with a slippery metal ladder. The LovedOne suffered some colorful bruises while saving herself from falling off this metallic horror.

Once past the ladder, the hike became a nice walk down to the river (where there’s a vault toilet and campsites) and then some up and down over to the broad outwash plain of White Rock Wash.

White Rock Wash proved to be a sandy bottomed, gently inclined path (there’s no specific trail – just follow the wash) right back to the trailhead. It doesn’t have any slots or pour-offs to crawl through or scramble over, but there are places where the towering walls lining it are pretty impressive.

All told, about 6.5 miles round-trip, with 900 feet of gain. It would be have been perfect if we could have managed some sunshine but it was much fun nonetheless. We were lucky to be able to do this hike on a weekday when there were only a few people on the trail. Since you can easily access the hot spring from the river, we imagine it can get quite crowed down in that slot canyon on winter weekends (the trail is closed in summer because of high heat).