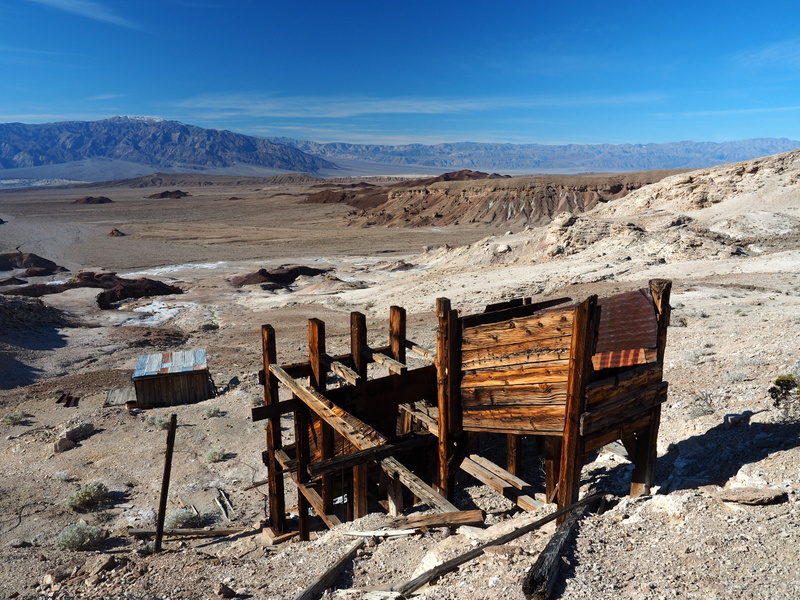 After we finished our “make-up” hikes near Las Vegas, we headed north to do some new (to us) hikes in Death Valley National Park. In 2018, we had paid a long awaited revisit to the Keane Wonder Mine. Access to the mine (one of the few in the valley that actually returned a profit) had been closed for several years for safety reasons but had reopened in 2017. Our hike of it in September was HOT but nonetheless very enjoyable. While perusing Michel Digonnet’s excellent Hiking Death Valley guide, we found a hike that started at the Keane Wonder’s trailhead but swung north, past Keane Wonder Springs and Cyty’s Mill, then climbed to the site of the Big Bell Extension Mine.

We started at the Keane Wonder Mine’s parking area and traversed north along the toe of the Funeral Mountains on a well-used use trail to Keane Wonder Springs. These springs had served as a water source for the mine and pieces of riveted 6-inch pipe are still scattered between the springs and the mine.

After a mile of contouring, we came to the huge salty expanse of Keane Wonder Springs.

About a mile and a quarter from the parking area, we came to Cyty’s Mill. Johnnie Cyty bought the mill used in 1911 and moved it here to process ore from his Big Bell Extension Mine some 1,800 feet above in the Funeral Mountains. He also built a really nice trail from the mill to the mine so pack mules could bring down the ore. But, as was often the case with so many of these mining hopes, the Extension went bust less than a year after the mill was in place.

The obvious use trail seems to end at the mill. But if you go east uphill from the mill, you’ll come to the still very obvious trail that Cyty built to his mine. Finding the mine trail at this point is the only tricky part of this hike. Once found, we had no problem following it all the way up to the old mine. Even after 100 years, it’s still a remarkably good trail. We are always amazed by the amount of work (move the mill, run water pipes, build a trail, mine the ore, haul it down a mountain, etc.) these old miners did in the vague (and usually unrequited) hope of striking it rich.

Once we were on the mine trail, we simply followed it as it switch-backed its way higher and higher into the Funerals.

About 3 miles from the parking area, after some steady climbing, the old mine trail crosses a saddle and starts contouring into the valley that holds the Big Bell Extension Mine and its prospects.

There never was much to this mine and there’s very little left of it now – old cabin floors, parts of an ore car, some rails, and other mining junk. One of the most poignant sights is two old spring mattresses in a shallow tunnel littered with old dynamite boxes and pack rat nests. It looks like the miners subsisted on oatmeal and canned sardines. 😦

After appreciating the view from the saddle, and a snack, we headed back. At one place we had to admire how Cyty incorporated a natural ledge into his trail.

All told, we did 6.4 miles round-trip, with 1,800 feet of gain (with almost all of that in the last 1.5 miles). Although there’s not much left of the mine itself, Keane Wonder Springs, Cyty’s Mill, a still good old trail, big views, and wonderfully cool hiking weather conspired to make this an excellent hike. 🙂