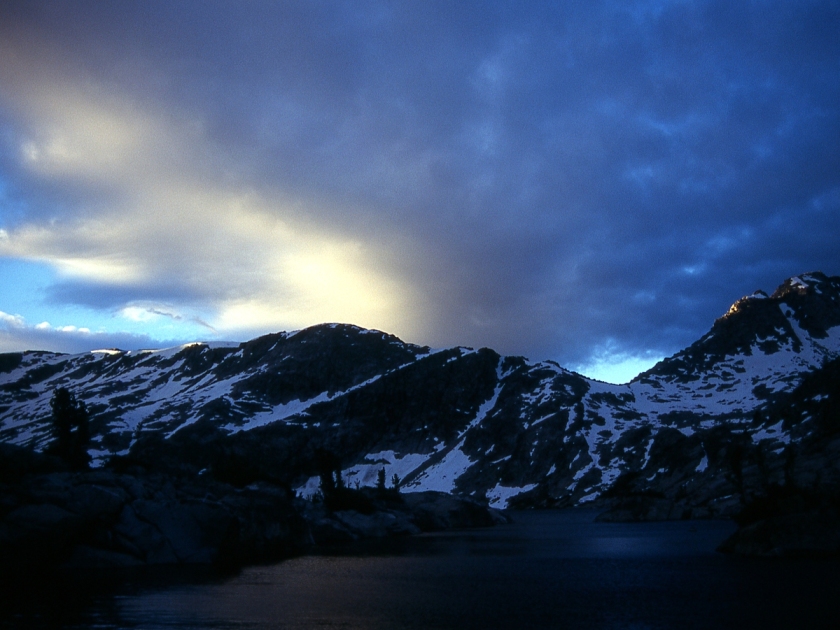 I guess every cult has some sort of initiation ritual. Wayne, Diane, and I became charter members of the cult of tough and stupid (T&S) thanks to our frozen suffer-fest on Telescope way (way) back in the day. After that experience, our paths diverged and converged at random intervals for the next twenty years or so as life had its way with us. Then, in 1990, Linda (aka The LovedOne) took me by storm [reminder to self – 2020 is our 30th wedding anniversary 🙂 ❤ ]. So, naturally, I petitioned Wayne and Diane to let her join our cult. While they acknowledged that marrying me may have a stupid aspect to it, that alone didn’t meet the unspecified, but strict, standards of the T&S cult. No, only a backpacking trip in the Sierras would be sufficient to test Linda’s bona fides (and let her see stupid stuff done by “experts”).

And so we found ourselves at the Florence Lake ferry dock one sunny day in September 1995. The lake sits in the John Muir Wilderness about 80 air miles due east of Merced, California. Our vague plan was to boat across the lake, hike north on the John Muir Trail (which aligns with the Pacific Crest Trail (PCT) in this area), camp, hang out, and (maybe) climb Seven Gables. Or not.

Despite an early start, it had taken us much of the day to drive the twisted roads to the lake, arrange for the ferry, and motor across the lake. So we only got as far as Alder Creek between Double Meadow and Blayney Meadows before deciding to camp.

It was a pleasant camp and a quiet night. At this point, Linda thought camping was great. So sad. Anyway, next day, we continued east to the PCT, then climbed lustily some 2,000 feet to our next camp at Sallie Keyes Lakes.

While there had been a few mosquitoes at our first camp, up here there were clouds and clouds of them. Clouds which only got denser as evening approached. Of the four of us, Linda was their favorite target. I don’t recall her being much amused by this attention. 😦

It eventually got cold enough to dissuade the mosquitoes. So we passed another quite night, broken only by the silent opprobrium directed at me by Linda as she scratched her numerous bites.

Next morning, we went up past Heart Lake, over Selden Pass, and down to Marie Lake. Even though is was September, there were still significant patches of snow near Selden Pass. Fortunately, not enough to require the ice axes we hadn’t brought anyway. 🙄

Not being encumbered with any sort of plan, we ambled down to Marie Lake and decided right then to go east cross-country to Medley Lake on the South Fork of Bear Creek. Wayne and Diane used their ritual hiking wands (we were way ahead of Harry Potter with this wand thing) to encourage Linda to make this journey.

We spent two nights at Medley Lake. During our full day there, Diane and Linda hung-out at camp while Wayne and I made an abortive attempt to climb Seven Gables. We went up the southwest ridge but wasted too much time looking for the “easy” Class 3 chute to the actual summit. Sigh. The next morning Wayne started the day off by beguiling us with his cooking moves.

As our dinners settled (or not) into our respective alimentary abysses, we discussed how we were going to get back. Sure we could just retrace our steps on the PCT but where’s the stupid in that? After map gazing, a brief scouting trip, and ignoring Diane’s concerns about boulder fields, we opted to go south along Three Island Lake, then up past Sharp Note Lake, across the saddle northwest of Mount Senger, and down to the PCT near Sallie Keyes Lakes. Mostly across boulder fields.

We got over the saddle and down to the PCT with no problems. So just an easy walk back? Well, ah, no. We (or, more precisely, Linda) hadn’t done tough yet. Somewhere between where we regained the PCT and our last camp back at Alder Creek, Linda’s boots turned on her. Like rabid twin honey badgers, they inflicted moon-sized blisters on both feet. She limped to Alder Creek, threw off her boots, and plunged her tortured feet into the cooling waters of the creek. 😥 Fortunately, the T&S cult requires generously equipped first aid kits so we were able to ease her suffering in no time.

The next morning, with her still tender feet swathed in socks and sandals, we made the short hike to the ferry dock. I didn’t realize then that, for the next 25 years, a substantial portion of each year’s REI dividend would go toward finding the perfect hiking boots for her. A year ago we seem to have gotten there – either her feet are tougher or boot technology has finally come of age.

After 5 nights in the wilderness, 25 trail and off-trail miles, voracious mosquitoes, exposure to Wayne’s cooking, tilted snow, endless boulder fields, and giant blister craters in her feet, Linda was still smiling. Why we’re not sure. But no one is sure about any of us either, so we voted unanimously (this was before the Russians helped with our elections) to induct her into our little cult.

And so the cult of tough and stupid marches on, secure in the knowledge that there’s nothing you can’t accomplish if you’ll just close your eyes and plunge boldly into the future (or a tree). 🙄