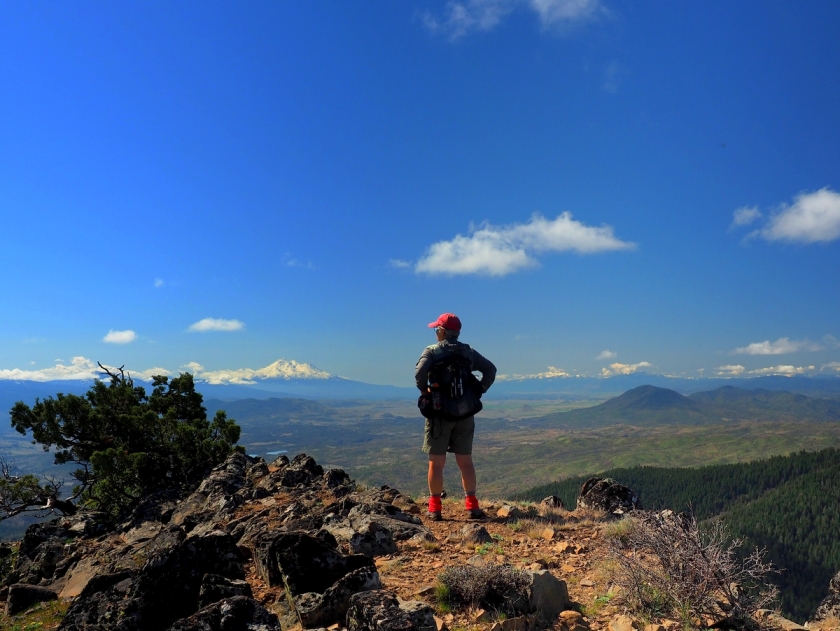 The hike out to the big views from Boccard Point in the Soda Mountain Wilderness is one of the classics here in Southwestern Oregon. You can reach it in two ways: as an out-and-back along the Pacific Crest Trail (PCT) from the Hobart Bluff Trailhead or from a more informal trailhead at the end of the Baldy Creek Road, one we first found out about from the Siskiyou Mountain Club. We’d hiked in from Hobart Bluff last year and so decided to venture in from Baldy Creek this year. We made a loop out of it by adding a short, easy cross-country transit over the summit of Soda Mountain. The views from both the point and the mountain were superb on this day of most excellent hiking weather. 🙂

The gravel roads to the trailhead were bumpy but clear and we were soon heading out on the trail toward the Point. The damage parts of the trail had suffered in 2018 due to wildfire fighting efforts for the Klamathon Fire had receded and we had an easy walk out to the rocky outcropping south of Point 5900.

Point 5900 is named after wildlife biologist Bruce Boccard who, as the first chair of the Soda Mountain Wilderness Council, helped, in 1984, to draw up the boundaries for what is today the Soda Mountain Wilderness. Boccard died of AIDS in 1987. In 1997, the U.S. Board on Geographic Names approved naming the point in his honor. There are no views from Point 5900 itself. Those are from the rocky outcrop at the end of the ridge (“Juniper Ridge”) running south from Point 5900, the place known locally as Boccard Point.

From the Point, we went back along the ridge and then up and around Point 5900. This involves crossing mostly open ground and some forest with little or no undergrowth. What brush there is can be easily avoided.

The terrain between Point 5900 and Soda Mountain opens out into a large, spring-nourished meadow, one that will be filled with wildflowers and waving grasses in a month or two. Today, Oregon fawn lilies were the most prominent of the early emerging flowers.

At the north end of the meadow is a faint old road that can be followed up along the south side of Soda Mountain. Around where this old road levels off, we left it and picked our way up the slope, guided by the obvious game trails that avoided the brush (Bambi is no more interested in pushing through thick brush that we are).

After taking in yet more views, we followed the service road (still blocked with snow piles and fallen trees) to a junction with a short trail that connects the service road with the PCT. It took us awhile to find the start of this trail as it was covered with several large fallen trees. Once found, however, it took us down to the PCT, which we followed back to Baldy Creek Road past a small pond full of chorusing frogs.

We didn’t see anyone else until we rejoined the PCT where we first heard and then caught a glimpse of several chatty people ahead of us. They veered off to inspect the frog pond so we never got close to them. Tracks in the snow along the PCT suggested other hikers around but we never saw any. We did talk (at a distance) to two hikers at the trailhead who had hiked in from Hobart Bluff. Otherwise, we had this 6 mile, 1,000 feet of gain loop to ourselves on this wonderful day for a hike. 🙂