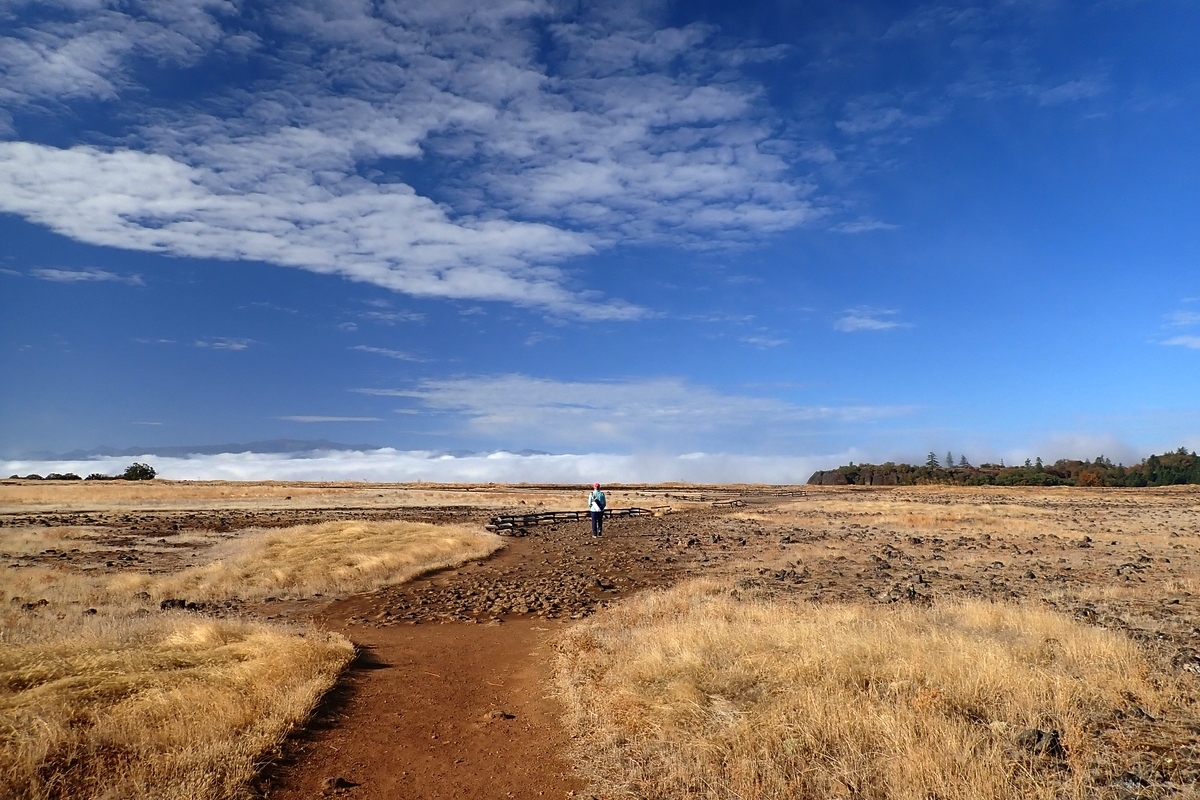 The Table Rocks are another set of compelling hiking areas near us. They’re very popular and best known for the wildflower displays and ecologically-sensitive vernal pools that burst out on their flat summits in the Spring. A visit then in search of new or different wildflowers – or better photos of old favorites – has become a bit of a ritual. Not this year. The Rocks are managed by the Bureau of Land Management (BLM) and the Nature Conservancy, who chose to close this area for several months because of the Big V. The closure was eventually lifted but then there was a lot of heat and smoke in the valley. So the last time we were able to visit was just before Christmas in 2019. But it rained ( 😀 ) yesterday, clearing the air and dropping the temperature. And some artistic clouds appeared! So we headed out to reprise a hike we did in 2019 that took us off the popular paths and through the wild center of the formation.

Despite the parking lot being on its way to full when we arrived, we didn’t actually see or cross paths with many other people while we were out hiking. On the plateau we passed a man, hiking with his son, who asked us – quite unexpectedly – whether we were that Boots on the Trail blog. He obviously recognized The LovedOne, as she’s the talent here (I’m just the camera person). He said he enjoyed the site and thought it was a good hiking resource. While it’s nice to get likes on social media, it’s even better when someone takes the time to give you a like in-person! So thanks for that! Much appreciated! 🙂

The valley was filled with a shallow fog, which we got above when we topped-out on the plateau. Once there, we worked our way over to a copse of trees that marks the way to an off-trail route around the cliffs and into the land between the legs of the horseshoe shape that is Upper Table.

We went into the trees, down a short, tricky slope of boulders slick with wet leaves and moss, and out onto more open ground. Once there we followed bambi (i.e., game) trails around the buckbrush, through a valley golden with changing oak leaves and sensecent grasses, and up to an old road. Following this fading old path took us back up to the plateau. Following game paths, and being able to connect with this old road, means that we can cross the valley floor without trampling all over any sensitive vegetation.

The old road took us to Pumice Lane, which at this end is the service road for the VORTAC station at the north end of the plateau. The lane continues past the station as part old, old road, part single-track trail. We followed it back to the main trail off the plateau. This older piece of Pumice Lane let’s us traverse the plateau, again, without trampling all over the vegetation (which is hard to do anyway since it hides a surface rumpled and uneven with ankle-bending rocks 😥 ).

This loop was 6.6 miles, with 1,000 feet of gain (almost all in getting to the plateau in the first place). Only a half mile of it is actual cross-country – from the plateau down to the end of the old road – but much of that can be done on game trails, of which there are many. This hike is best done in Fall and winter when some of Nature’s less friendly (or perhaps too friendly?) species (poison oak, ticks, rattlesnakes) are less likely to be active. In all, we returned – finally – to Upper Table for an excellent hike in wonderful weather. 😀