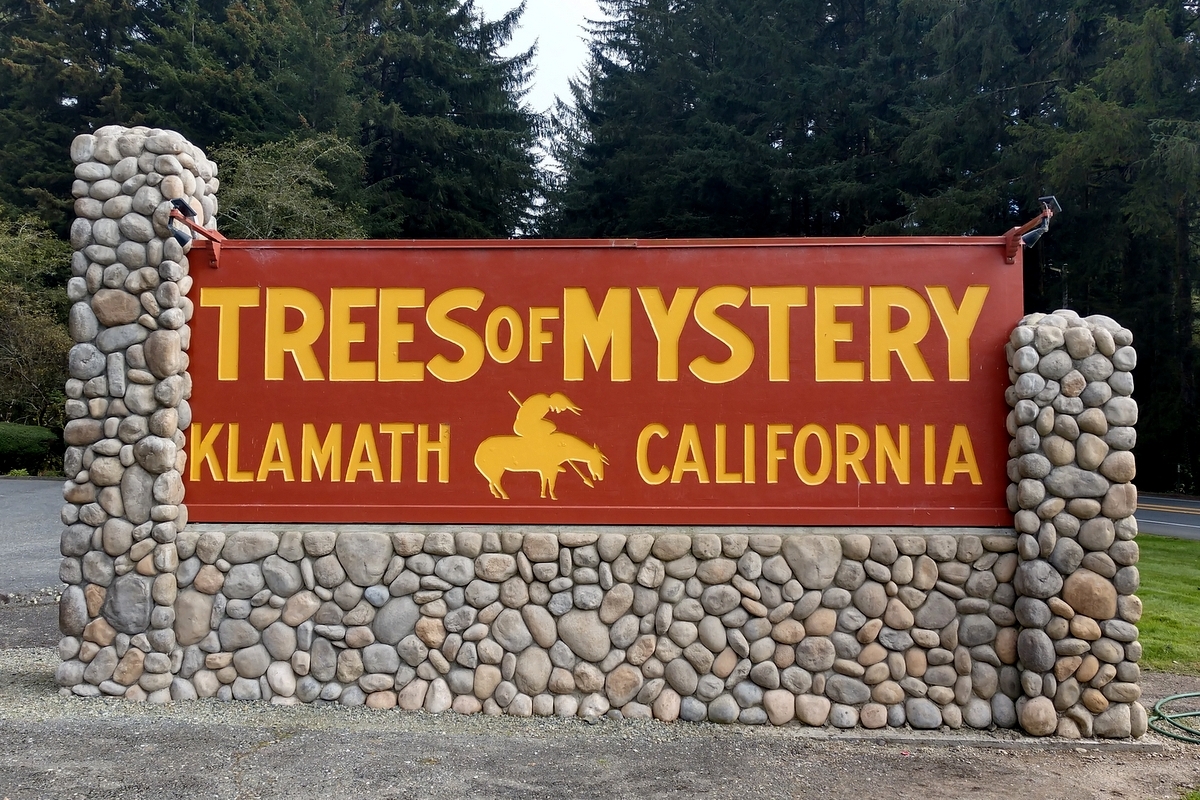 My parents were very hard workers; not given much to frivolous (in their eyes) expenditures. Exceptions could be made (rarely) for Disneyland. But visits to smaller kitschy tourist attractions, no matter how iconic, were off the table. And certainly we were not going to drive the length of California to see some trees, regardless of their degree of mysteriousness. So a visit to the Trees of Mystery, a small attraction in the redwoods just south of Crescent City, California had to wait its turn. And wait and wait and wait. But, past a certain point, this waiting wasn’t on my parents. Although I must have driven past it numerous times over the years, I had other places to go and no time for a tourist trap. Well times change (don’t they ever!). Now I had some time and not a lot of other places to go. So we started a short hiking trip to the coast with a long delayed visit to the Trees of Mystery.

The Trees, which opened in 1946, manages to combine a number of contradictions. Such as Paul Bunyan, a mythical logger, on one hand and glorification of soaring giant redwoods on the other. One of the best Indigenous museums in California that is otherwise not on tribal land. And so on. It would have been easy to get judgmental here if 2020 hadn’t already wrung the snark out of us (But, wait, there’s more 2020 ahead! 😥 ). So we just went and enjoyed the Trees’ attractions for a brief respite from reality.

We started with the recently opened Redwood Canopy Trail, a series of platforms and suspension bridges linking some truly giant trees some 50 feet (15 m) to 100 feet (30 m) in the air. Except for the attendants at each end, we were the only ones on this entire attraction.

After the Canopy Trail, we interacted (at least The LovedOne did) with some of the sculptures that are scattered along the trail and saw a few really, really big trees – some almost as big as the fabled Boy Scout Tree.

The Canopy Trail dropped us near the base of the SkyTrail gondola ride, where eight cars make an approximately 8-10 minute, 1,570 foot (478 m) trip up to Teds Ridge. The cars run continuously and the whole line sloooows down when they are loaded or unloaded at either end. It gives you more time to look at the trees but can be a bit disconcerting if you are used to trams that move continuously.

You can supposedly see the ocean from the observation platform at the top of the gondola ride but low fog on the coast prevented that. So, as a tiny act of redemption for having ridden through the trees, we elected to walk through them by hiking down the one mile Wilderness Trail. This proved to be one steep sucker – one that would be a real toboggan ride if it were wet. Which is why the “Trail is subject to closure depending on weather conditions.“

On the way to the gift shop – like all good tourist attractions you have to exit through the gift shop – we went through a sculpture garden of giant wood carvings. We were particularly taken by the huge one of a squirrel. About the same size as the squirrels that keep attacking our bird feeders. 😉

We bought a few small trinkets in the gift shop – one of which was an assemble-it-yourself squirrel kit (as though we needed another one of those) – and then we were back in the parking lot. Our visit was kitschy, silly, overbuilt, and full of contradictions but still an oddly good time. Simply put, we enjoyed it. 🙂 We were helped along in our enjoyment by our timing, which couldn’t have been better! October is the off-season anyway and the Big V elevated that to the off-off-season. So the giant parking lot had barely a dozen cars in it and we pretty much had the place to ourselves. After that it was back to Crescent City to rest-up for our hike on the morrow to Hidden Beach. 😀