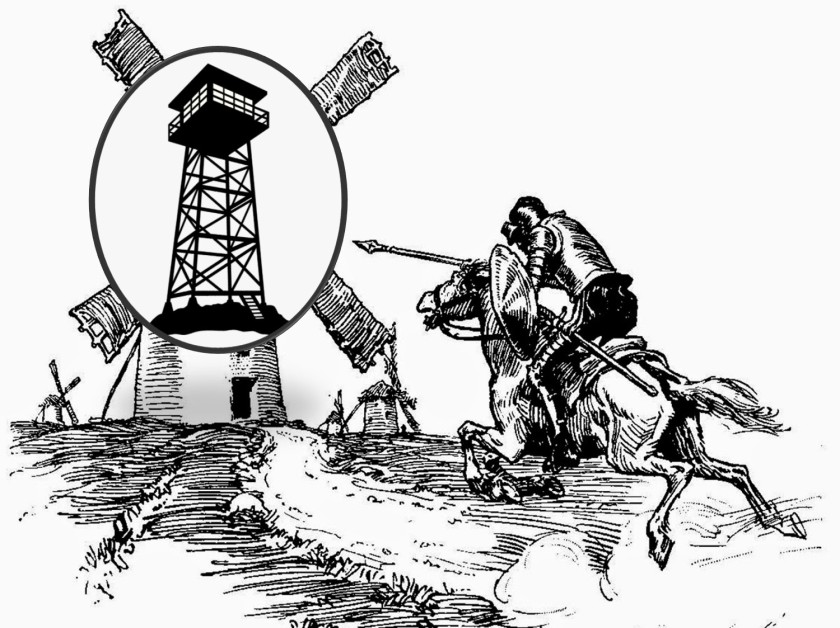 2020-10-27 Boots on the Trail Other Adventures, Southern Oregon 6 comments

A while back, I’d come across a hiking guide that the Rogue National Forest had assembled in 1969 (before it merged with the Siskiyou National Forest) for the area around Union Creek on the upper Rogue River. It’s a charming early effort to get people out of their cars and on the trails (a move the Big V seems to have supercharged). Sadly, almost all of the trails in it are no longer with us, having been replaced by forest roads or allowed to wither away once their primary purposes (mainly providing connections between ranger stations, guard stations, and fire lookouts) became served by these roads.

The guide mentioned that a fire lookout tower once stood on Point 6281, just north of Huckleberry Mountain. A tree lookout had been constructed on the mountain in 1919 but sometime in the 1920s the Forest Service constructed a D-6 cupola lookout on Point 6281. By World War II that had been replaced by what looks like an L-6 cab on a tall wooden tower. It survived until sometime in the early 1960s.

The guide also listed a trail to a lookout tree located just east of Point 6281. Whether this was the same tree as was used in 1919 or a new one is not clear. This natural lookout was described as a 75-foot tall noble fir tree, with an 8-foot wide platform (below left) nailed to its top and a pole-ladder up its trunk (below right). This set-up offered fire lookouts in the early 20th Century a safety-free working environment, particularly in high winds or if they were prone to dozing-off on the job. 🙄

The hiking guide indicated that, as of 1969, the lookout tree was still extant, except for the lower sections of the ladder that had been removed for safety. The guide even indicated that there was a trail to this tree:

The Lookout Tree Trail {The tree was supposed to be 0.7 miles east on this trail.} is approached from Highway 62, mile 63.1. The highway sign directs you to Huckleberry Campground as you turn onto rock-surfaced Road 311. Follow it 4.1 miles to the edge of the campground. Then turn left on Road 3126. 2.4 miles farther up the ridge you will see the trail sign at a small parking area on the left. If your car has limited clearance, watch out for the drain dips on Road 3126. 6.5 miles off highway.

And it even included a handy little map, which had to be translated into today’s maze of forest roads, all with new and different numbers.

Having gotten this far into the lookout rabbit hole, I (of course) had to ask: “Yeah, it’s been 50+ years but is that tree still there?” So, adopting the delusional, but proud, approach that Don Quixote blazed lo those many years ago, we set out on a quest for the lookout tree. The LovedOne, playing the role of Sancho Panza to the hilt, questioned the sanity of this endeavor on several occasions. She may even have employed earthy wit from time to time. But it was of no avail! The quest was afoot!

Putting foot to accelerator, we drove up to the old lookout site on Point 6281 on the north end of Huckleberry Mountain. We were interested to find that, while the last piece of the road up to the lookout site is certainly there, it no longer appears on Forest Service maps. After bumbling and swaying our way up there, we can confirm that all that’s left of the lookout tower are the concrete footings on which it sat.

The 1969 guide talks about a sign and a trail for the lookout tree starting 0.1 miles down the road from the old lookout site. But after 50+ years, we couldn’t find either one. So we went east along the ridge for 0.7 miles and wandered around looking for a denuded tree or some ladder parts or platform parts or any mortal remains of a fallen giant. No lookout tree or its remains were sighted. 😥 We did, however, get a very nice view of Union Peak to the east. 🙂

But it’s out there somewhere; we can feel it. Or more likely we can feel the taste of Beckie’s Cafe huckleberry pie in our mouths and are simply looking for an excuse (as if one is needed) to re-visit the Union Creek area. Which, of course, we will… soon. Because there’s absolutely nothing quixotic about pie! 😀