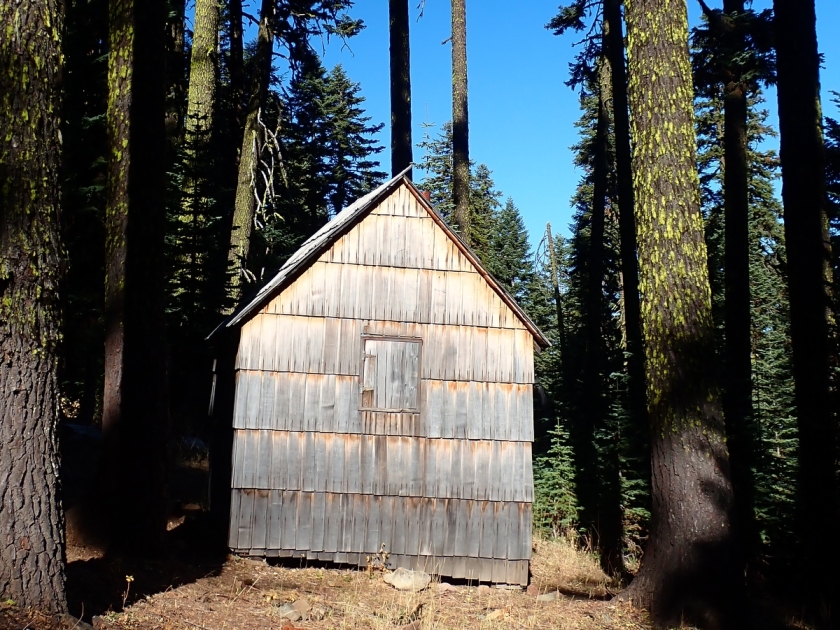 The U.S. presidential election. A year (or more and then some) of huckstering and debating and pleading and donations and punditry culminating in the Big Day (or Night). Of course we had our preference for who would emerge still standing from this melee. And, although forewarned, we naively clung to the hope that there would be a quick resolution. But no, counting started and kept going and going and going as the tension mounted and mounted. The Big Day and Night passed and by morning it was clear that our nerves were likely to snap before we’d know anything for sure. Then, if X wins (or seems to have won), Y will scream: Cry havoc and unleash my lawyers! All this was getting to be too, too much. We obviously needed to give our nerves some respite with a hike.

After rummaging around in my file of short, but interesting, hikes, I came up with the Seven Mile Ridge Trail #939, which runs north and south along the ridge between Wrangle Camp and the Upper Little Applegate River. This is an old trail that once was the only connection between the camp and the valley. Its utility faded when that connection was made with Forest Road (FR) 2030. It’s primary users now seem to be cattle in the summer (the big meadows above and below Jack Flat are historic cattle grazing areas) and hunters in the Fall. Two miles or so of it were burned by the 2001 Quartz Gulch Fire and then again by the 2018 Hendrix Fire. Yet it traverses an area rich in the ranching, mining, and Depression-era history of the Upper Little Applegate Valley.

We got going with this by driving up washboard and pothole-strewn FR 20 to where it crosses the Pacific Crest Trail (PCT) at Wrangle Gap. Several other “hikers” were gathered where we parked and were chewing languidly on some dry grass. The weather was perfect for hiking (and chewing). 😎

We walked down FR 2030 to Wrangle Camp where there is a rustic shelter that was built by the Civilian Conservation Corps (CCC) in 1936 (the Forest Service has since added a modern pit toilet). Nearby is a cabin built by the Soil Conservation Service in the 1930s.

A little farther down FR 2030, we came to the unsigned junction with the #939. The trail is shown on current Forest Service maps and is mentioned, in passing, on their website. Otherwise we had no clear idea of what lay ahead. It started as an old road and then became a single-track as we crossed a huge meadow on the west side of Big Red Mountain.

The #939 has seemingly not been maintained for many years, but was not too hard to follow except where it crossed a meadow or passed a spring. In these places it had often been trampled into invisibility by cattle (of which we passed several). We soon came to Jack Flat, an area that has been used for cattle grazing since the early 1900s.

At roundup in the fall. Art {Kleinhammer – a prominent rancher who went bankrupt in 1925} would organize the drive so that sections of the range would be systematically covered. There were three holding corrals complete with cabins and sheds. One was called “Freezeout” on the northwest slopes of Wagner Butte. Another was “Jacks Flat” [mapped as Jack Flat today] on Seven Mile Ridge. A third was called “Brick Pile” on the northern tip of Seven Mile Ridge.

Stories on the Land: An Environmental History of the Applegate and Upper Illinois Valleys (1996)

We didn’t find a cabin at Jack Flat, just an old corral and an old, unmapped road. Looking later at aerial photographs, we could see that this road ran up to Sevenmile Ridge and crossed the #939 there. But we continued on the trail to where it left the forest to give us a view of the Applegate Valley.

Soon after this view, the #939 reached the crest of the ridge and, surprisingly, became an old road. But our plan had always been to not continue farther on the #939 but rather turn south here and follow Sevenmile Ridge cross-country back up to the PCT.

We had expected to have to wend our way through forest and undergrowth as we climbed the ridge toward the PCT. But no, as it was soon apparent that there was another, even older old road, going right up the ridge! Although it gradually deteriorated into a single-track use trail as it climbed, this old road gave us an unexpectedly easy path up to the PCT. But why was it here?

As we neared the PCT, it became apparent that the old road/trail was drifting southeast toward the site of the Red Mountain Mines. This was a chromite mine that operated here in the early 1950s when the federal government was subsidizing the mining of chromium for defense purposes. A similar mining effort, the New Hope Claim (a giant ditch), existed, in the mid-1950s, on Sevenmile Ridge south of Point 6024. Neither of these mines were particularly productive and all failed when the chromium subsidy was withdrawn. We suspect this old road was a way to access the Red Mountain Mines from the Upper Little Applegate Valley.

Immediately above the mine we came to the PCT and strolled easily along it back our truck at Wrangle Gap. The other “hikers” were still there, chewing.

After 5.5 miles (8.8 km) and 1,020 feet (305 m) of gain, we got home to discover that the counting was still going on (and on and on). And the lawyers had been let loose to argue that fraud only happens to one vote on a multi-vote ballot and only when the other guy is (maybe) winning. There must be some lawyerly logic here that our simple, rational minds just can’t grasp. 🙄 But we did have this interesting hike through some of Southern Oregon’s history to offset our confusion and allay the tension. 🙂 Fingers crossed, all this counting and lawyering will be done by 2021! But let’s not count our chads until they’re hung! 😳