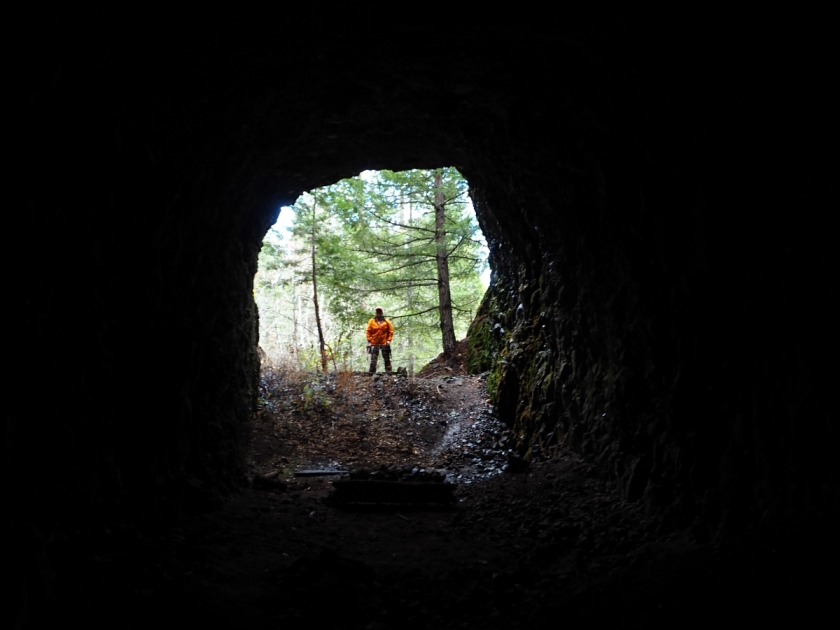 In the early 1880s, the then Oregon & California (O&C) Railroad was trying to extend its tracks south to the California border. So they surveyed a route that looped around Buck Rock south of Ashland. This particular route crossed difficult terrain that would require multiple tunnels and tall bridges. The O&C had just started on the tunnels (including the Buck Rock Tunnel – O&C Tunnel No. 13) on their route when they were acquired by the Southern Pacific Railroad. That railroad’s civil engineers had a different, shorter, less expensive route to California in mind. So the half-completed Buck Rock Tunnel was abandoned where it was in the ridge south of Buck Rock. It’s still there and intact after 140 years and has recently become something of a popular local hiking destination, accessible mostly on abandoned roads and an obvious use trail. It now lies within the Cascade-Siskiyou National Monument and the Bureau of Land Management (BLM) built a small parking lot at the end of the dirt road you can use to access it.

Considering that the day was forecast to be overcast, exploring the inside of a dark tunnel seemed like a good idea. We threw in a hike to the summit of Buck Rock because it’s there. Getting to the little BLM parking lot was straightforward but there’s no signage there to connect it with the tunnel. We passed the big yellow gate and walked up the old road past two junctions with other old roads.

We came to a third junction, turned left (east), and followed another old road (a single-track in some places) up to just below the saddle between Point 4087 and Buck Rock. A little cross-country (easy when the ticks, snakes, and poison oak are off-duty for the season) got us to the saddle which we followed north to Buck’s rocky summit.

It probably wasn’t a great idea to gain a viewpoint on an overcast, photo unfriendly day. While the view today was acceptable, it would probably be great on a clear, sunny day.

From the summit, we worked our way back down to the road we’d come up on, then followed that until we were above the site of the western end of the tunnel. There’s an eastern end too, which we didn’t get around to visiting this time because it’s mouth is a little harder to find. We managed a little more downhill cross-country that brought us to the trail leading to the tunnel.

We spent some time wandering around in and out of the tunnel, had a snack, and headed back by circling around Buck Rock’s eastern side all on old roads. Now that we weren’t going to the summit for views, it was blue skies almost all the way back. 🙄

The summit, the tunnel, and circling Buck Rock came to 7.3 miles (11.7 km) with 1,700 feet (518 m) of gain. This odd little hike has a lot going for it: a summit with views (if the sky cooperates), a unique piece of railroad and Southern Oregon history, and a nice walk on easy-to-follow old roads. Given that 2021 isn’t starting off as drama free as we’d hoped, it was a nice break from the world. 🙂