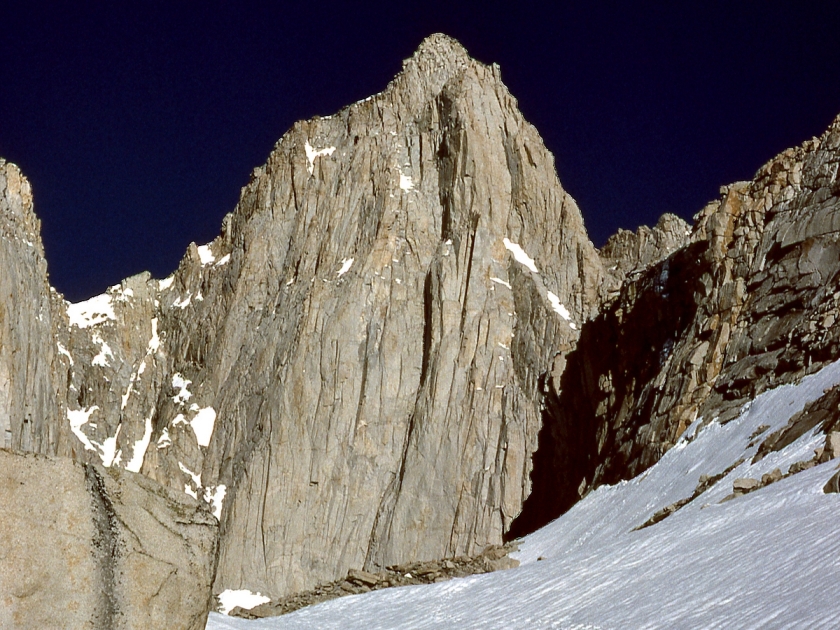 Sometime in the 1990s, we were in an Independence restaurant eating breakfast, having just come down from a climb in the High Sierra. Suddenly shouting erupted outside and I looked-up to see a man running down the sidewalk yelling and waving a piece of paper. Angst over a parking ticket? A lottery winner? As he zoomed past the restaurant and on up the street, we could hear him screaming: “Hans! Hans! We have the permit! We have the permit!” Apparently he and Hans had come all the way from Germany to climb Mount Whitney (14,494 feet (4,416 m)), the highest point and arguably the most famous – or at least the best known – peak in the continental United States. Even then, people came from all over to climb it. But the permit requirements had begun hardening in the mid-1980s and now concessionaires or rangers were around to enforce them. These two hadn’t gotten a permit in advance and were justifiably ecstatic about snagging a rare walk-up one. Considering Whitney’s current level of popularity, having that happen today would exceed the miraculous.

But such was not the case when we climbed Mount Whitney twice in consecutive years in the early 1980s via the Mountaineer’s Route {the photos below are a mix from both trips}. I don’t recall fretting at all about permits or reservations then – we just drove to Whitney Portal, slept in the parking lot, and started hiking to basecamp the next morning. Both climbs took place in May and we were on snow starting around Lower Boy Scout Lake. We were also fortunate to have excellent weather both times.

The approach up along the North Fork of Lone Pine Creek was barely a trail in those days. We had previously explored the then (and still) suggested Ebersbacher Ledges route but decided to forego it in favor of doing a little bushwhacking along the creek to Lower Boy Scout Lake. From there it was mainly a snow hike, with a little rock scrambling, to our basecamp at Iceberg Lake. The view of the east side of the High Sierras from the lake was (and is) stunning.

The Mountaineer’s Route is an easy rocky scramble when snow-free but deceiving when snow covered. Then it’s a moderately sloped east-facing chute – with a reasonable run-out – up to a notch. Just beyond the notch, the route turns on to Whitney’s north face. That face is a steeper affair with a short run-out over a 2,000 foot (610 m) drop (if snow conditions allow, you can contour farther west to a gentler slope). The first time we did this route the north face was a sheet of ice. The second time it was hard snow. Both times required ice axes, crampons, and good technique.

The summit plateau was a rocky expanse and the famous summit hut held a foot-thick (0.3 m) sheet of ice. There were huge, expansive views in all directions. It was utterly amazing both times!

It was sunny and warm on top, with only a gentle breeze – ideal for just lounging around. I’ve often suspected that hypoxia contributed some to our odd behavior up there. Larry fixed himself an apple butter and sardine sandwich, these being the only food items in his pack (it actually tastes better than it sounds or looks 🙄 ).

John – having graduated from Dalhousie University – claimed Mount Whitney for Nova Scotia. We made him give it back, pointing out that Canada has plenty of bigger peaks of its own. Well, maybe not in Nova Scotia, but still…

After about an hour of this giddiness, we made an uneventful descent of the route back to basecamp, got a good night’s rest, hiked down to Whitney Portal the next day, and drove home. We’d make an unsuccessful attempt on this route in the winter of 1985 (we were hit by a blizzard at Lower Boy Scout) and Alan and I would climb the East Face later that year. Then that was it for Whitney, as other summits beckoned and Life started taking some unexpected twists and turns (as it often does).

These were two great Spring climbs of Mount Whitney, with good people, and in excellent conditions. But looking back, the one thing that stands out is how we were the only people up there both times! There were a few tracks in the snow other than ours, but we didn’t actually see another person for a total of eight days. We had the whole beautiful area to ourselves for those days and the summit was ours alone too. But rock climbing and mountaineering (and even backpacking and hiking) were still niche activities in the 1980s and not near as well understood or popular as they are now. Properly prepared and equipped people can still experience the summit of Mount Whitney (assuming, of course, they first experience the miracle of the permit). It’s unlikely, however, that anyone today will experience the complete solitude we did back in the early 80s. 🙂