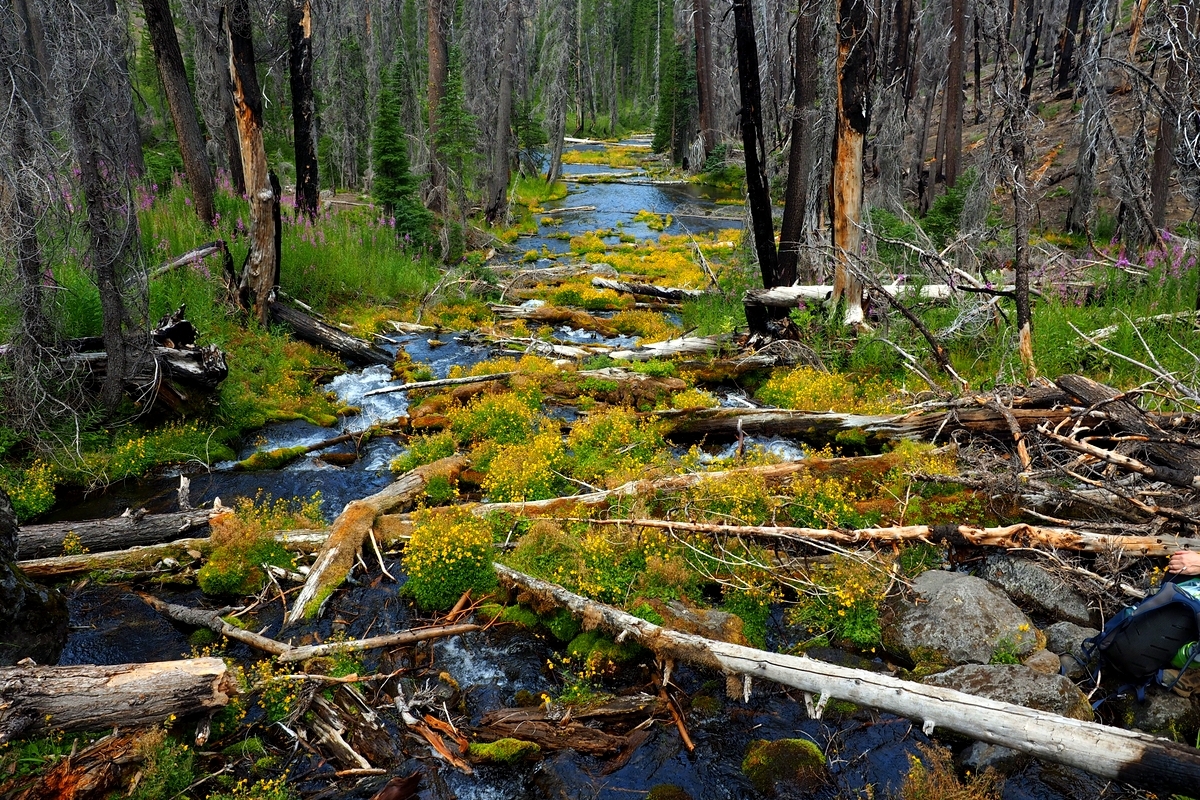 Boundary Springs – which emerge from semi-arid terrain in the northwest corner of Crater Lake National Park – are the source of the mainstem of the Rogue River. Many other tributaries and streams contribute to the Rogue before it reaches the sea at Gold Beach, but that river starts here. It’s tempting to think that these springs somehow tap Crater Lake itself but they are, instead, fed only by snowmelt.

Our first, and only, visit to Boundary Springs was during a 2012 hiking trip at Crater Lake. The trail to the springs (Boundary Springs Trail #1057) leaves the Upper Rogue River Trail #1034 about 0.5 miles (0.8 km) from the trailhead at the Crater Rim (or Mount Mazama) viewpoint on Highway 230. In March of 2015 we inaugurated our hikes of the entire length of the #1034 with a hike from the viewpoint to Hamaker Meadows. We didn’t detour to the springs on that trip. Then, in late 2015, the National Creek Complex Fire roared through this area, obliterating the forest around the #1057 and the start of the #1034. 😢 What with trail closures, falling snags, and delays in trail maintenance, we never went back.

And then Rich Stickle – who organizes the Monday hikes for the Ashland Hiking Group – asked if we’d like to go on one of their hikes. We said “yes” and joined him and others in the group for a hike to Boundary Springs. We’d meet some new people (not something we’re particularly good at) and also see how the forest enroute to the springs was doing almost six year after the National Creek Fire tore through it. Pie 🥧 at Beckie’s after the hike was an added inducement.

After just 2.5 miles (4 km), we reached the springs – which are still flowing merrily. The riparian zones nearest the water were comfortingly green, some of the mature trees had escaped the fire, and there is an abundance of new trees near the trailhead. But much of the forest we traversed had been reduced to dead snags.

When we hiked here back in 2012, I took pictures of all the “interesting” stuff and almost none of the forest itself. I just took the trees for granted – they’d always be here, so why photograph them? Another mistake on my part – along with the one about me thinking that climate change wasn’t already here. 🙄

Even up here at 5,000 feet (1,525 m), the day was heading toward overly warm and there was smoke haze in the air, so it was just as well this was a short hike. So, after a brief lunch break at the springs, we headed back.

This hike sure brought out some mixed feelings. On the happy side, we really appreciate Rich asking us along on this hike – we met some new and interesting people and I got to talk in-person (!) with some who follow this blog. And the hike itself was just the right length for the day’s weather. And the springs are still flowing! And there were also a few signs that at least some of the forest might be growing back. On the sad side, there weren’t enough of these signs and a lot of the forest we took for granted in 2012 is still just burned snags. Whether it will ever return to its former glory is exceedingly uncertain at this point. One thing is certain is that climate change isn’t no problem or even tomorrow’s problem, it’s today’s problem.

But two slices of Beckie’s wonderful pie 🥧🥧 lifted our otherwise somewhat tattered spirits, so it became a good day after all and overall. 😊