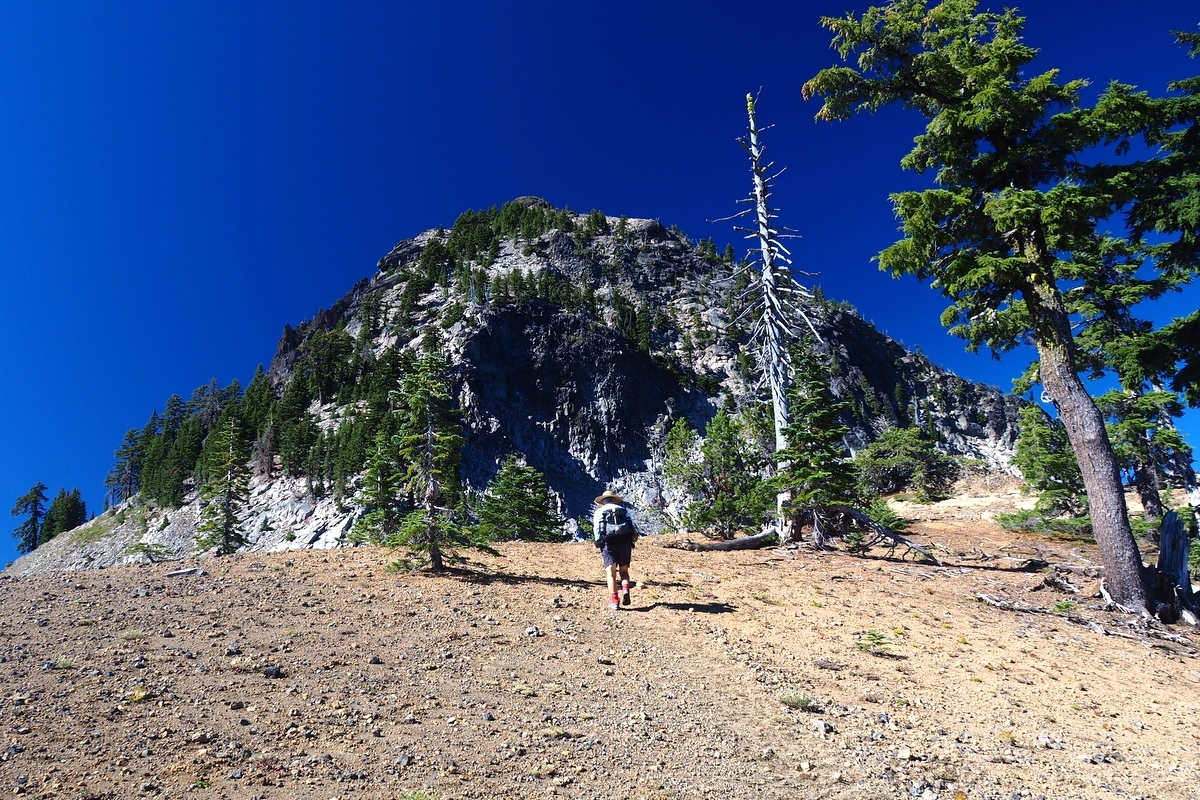 We said good-bye to summer with a hike up Union Peak (7,709 ft / 2,350 m) in the southwest corner of Crater Lake National Park. The peak is the eroded remains (the neck) of a much larger volcano and is the second oldest peak in the park. The views from its summit are spectacular – provided they aren’t obscured by smoke. Which they were for most of this summer. So when our recent rains cleared the air and damped the wildfires, we knew it was time to visit Union again after a six year 😲 absence.

This hike starts from a poorly signed parking lot where the Pacific Crest Trail (PCT) crosses Highway 62 just northwest of the park’s south entrance. There are no amenities here (other than a porta-potty), but you don’t have to pay the park’s entrance fee either. From here we went 2.4 miles (3.8 km) southwest on the PCT through a “green tunnel” of trees to a signed junction with the Union Peak Trail.

From the junction, it was about another 1.5 miles (2.4 km) through more forest until the impressive east face of Union popped into view.

The hike is pretty gradual up to this point but that soon changes. After traversing a boulder field and a stretch of cinders, we reached the steep part of the peak and began hiking and scrambling up a series of ever shortening switchbacks. One has to admire the dedication it took to carve a trail up the side of this peak.

We reached the summit and its views around noon. There was some haze obscuring views to the south (as there often is) but the views elsewhere were expansive! 😀

After filling-up on views and a snack, we retraced our steps back to the trailhead. It’s the same distance in both directions, but going back always seems to take longer. 🙄

The out-and-back to Union came to 9.4 miles (15 km) with 1,500 feet (457 m) of gain. The weather had been near-perfect all day: crisp in the morning rising to sunny and warm by mid-day, with a light breeze throughout. And no bugs! Two SOBO section backpackers passed us on the PCT, otherwise we had the trail and the peak to ourselves.

It had been worth waiting-out (as if we had a choice) some seven weeks of stifling wildfire smoke to have a brilliant day like today. To add sprinkles to such perfection, we stopped by Beckie’s Cafe in Union Creek on the way home. We were aiming for pie to-go (which we got 😍🥧) but stayed for dinner too. Thus, when we got home, we were able to skip cooking and cleaning, and just sit on the couch stuffing pie in our faces. 😁