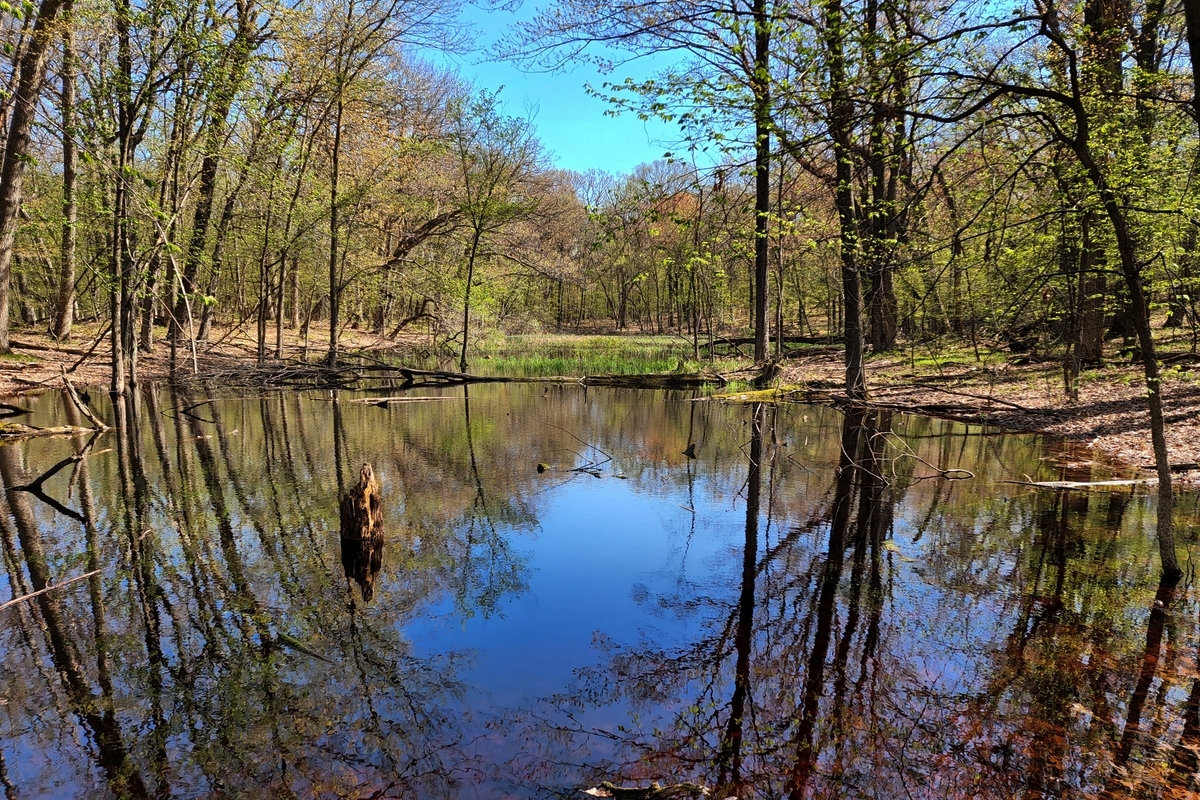 Yesterday, our state park quest took us south to Nerstrand. Today, with the weather still holding at exceedingly pleasant, we went northwest to Lake Maria (ma-RYE-ah) State Park near Monticello. Like Nerstrand, Lake Maria preserves another piece of the Big Woods in gently hilly terrain sculpted during the Wisconsin Glaciation. The forest up here didn’t seem as leafed-out and there were just a few wildflowers blooming (mainly anemones and violets). But this park did give us a good rolling walk and a summit too! 😉

Lake Maria is popular – it’s covered in 60 Hikes (Hike #46) and Hiking Minnesota and on the Hiking Project. Its several trails can be crafted into loops south and north of the Trail Center. We first did a loop south using the Bjorkland Trail (which is also the Hiking Club Trail) and then a loop north, mainly on the Big Woods Loop Trail, thus creating our own Figure-8 loop hike.

Again, all the trails were easy to follow, with maps at every major junction – a world away from the minimally signed, and often hard to discern, trails we knew out West. We’ll have to be careful that all this helpful signage doesn’t diminish our navigation skills. 🙄

We found the Hiking Club password, returned to the Trail Center, got reoriented, and then headed west on the Kettle Kame Trail past Camper Cabin #3. We soon joined the Big Woods Loop Trail, which we followed around the north and east sides of the park back to the parking lot. We diverted slightly to reach an expansive view from the summit of Anderson Hill – the only hilltop view we’ve had thus far in Minnesota.

Our Figure-8 came to 5.3 miles (8.5 km), with a cumulative elevation gain of 500 feet (122 m), with the rolling terrain being good for the legs. We passed several other hikers on the trails, along with a few backpackers who had overnighted at the tent sites scattered around the park.

This hike, along with the other hikes we’ve done here recently, further dispelled the notion that Minnesota is mostly flat – like some of the prairie states to the west and south. Yes, it has its flat areas. And, yes, it doesn’t feature soaring mountains. But the rolling terrain bequeathed the state by glaciation lo those many years ago makes for energetic and fun hiking. That, with trees, water, and wildflowers, makes for a winning combination! 😁

The LovedOne selected the Nordic Brewing Company in Monticello to celebrate our summit. Limited food offerings (but good!), bolstered by a selection of tasty beers. 🍺🍕 A good way to rehydrate after all that rolling terrain! 😊

BACK TO BLOG POSTS