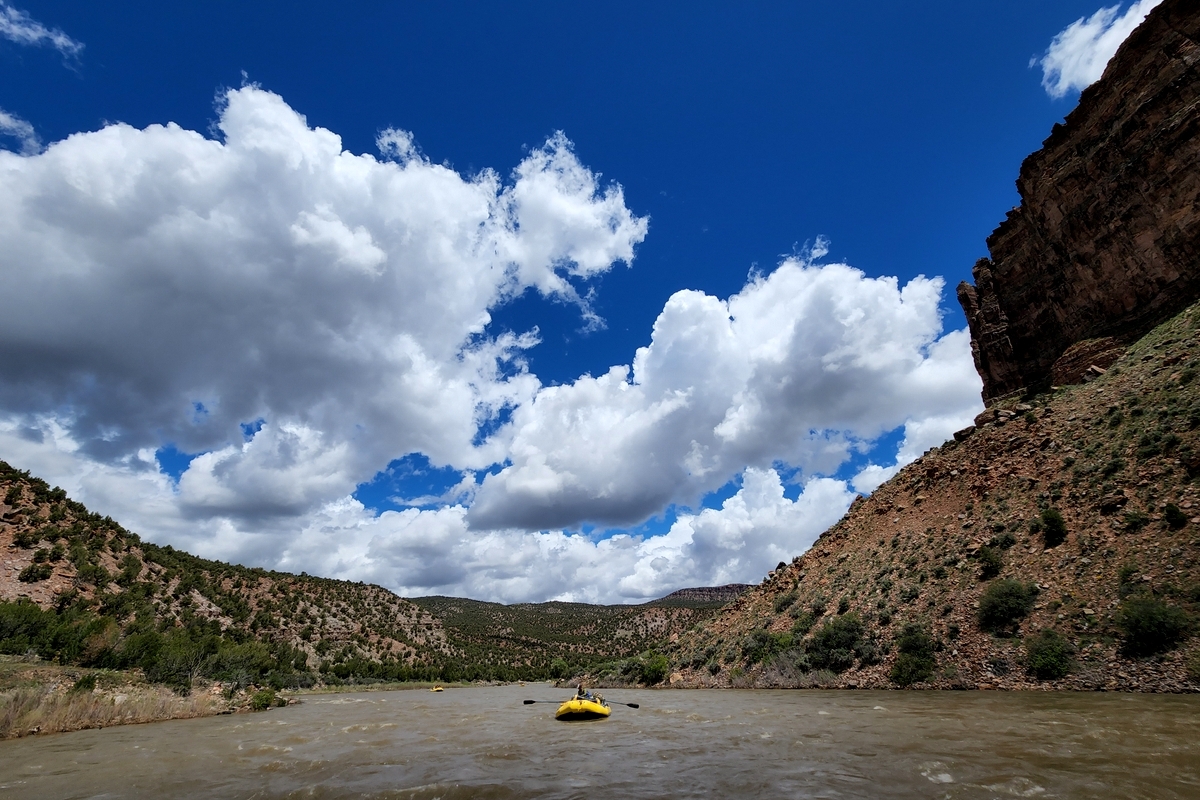 Well before we decided to upend our lives and move to Minnesota, we made plans to raft the Yampa River with our friends Wayne and Diane and his sister (Bonnie) and her husband (Jim). This trip was to start on May 30th. We began our move on March 15th and – despite the usual glitches and forced errors – were done with it (almost miraculously) by May 27th. Two days later, we lit out for Utah, leaving behind a house full of unopened boxes, a somewhat bewildered cat, and a lot of moving generated anxiety.

Except for a few weirs, the Yampa River is the only unregulated and naturally flowing major tributary remaining in the Colorado River watershed. Because its flow isn’t managed by any dams, the rafting season on it is short – just three months or less. Private party permits are extraordinarily hard to obtain and often a guided trip is one’s only chance to experience the canyons of the Yampa.

We were on the Yampa once before (in 1992) but then well upstream of its most spectacular section – which traverses Dinosaur National Monument between Deerlodge Park and Echo Park. To see this section, we again signed on to a guided trip offered by OARS. We got this adventure going by flying (uneventfully) to Salt Lake City, where Wayne and Diane picked us up and drove us east to Vernal, Utah where we met the rest of our group and Lee, our trip leader.

The next morning we were driven to the put-in at Deerlodge Park, about 90 miles (144 km) east of Vernal, where we met the other five guides for this trip. As we’ve come to appreciate from our several previous trips with OARS, our guides were friendly, outgoing, and skilled professionals who worked hard to make our trip run smoothly and successfully. It was through their excellent efforts that we had this opportunity to experience the Yampa River (and revisit some favorite spots on the Green River). 😁

Today was planned as a short one on the river. Which was just as well since the weather, after appearing to cooperate, turned on us. We began under cold, but sunny, conditions and floated down to Anderson Hole, where we stopped for lunch and visited Stubs Cabin, an old settler dugout.

The air temperature was cold at the start, with dark clouds mixed with sunbreaks and a few sprinkles. By the time we reached Anderson Hole, the clouds were still threatening but things had warmed a bit. Lunch was consumed in pleasantly warm (and dry) sunshine. 😎 The attraction here – Stubs Cabin – was built around 1918 by wrangler Stub Adams who trapped wild horses when they came down to the river for water.

There are no rapids on this stretch of the Yampa, so after lunch – and now under sunnier and warmer skies – we continued floating downstream.

We pulled into camp under mostly sunny skies and were able to get things set-up under dry conditions. So a fireline to bring the gear ashore, followed by deployment of the chair circle (which didn’t exist on our first rafting trip in 1994 – we sat on the ground), a search for a good tent site, and then the setting up of our tent. We’ve been on a rafting trip where the guides setup your tent for you, which seemed really unnecessary to us, given everything else they have to do. OARS isn’t like that, so we picked a spot and unfurled our tent ourselves.

We got almost all the way through dinner before the first sprinkles arrived. We kept eating as the number of raindrops increased. It was a dead heat between dessert and magic sky water. After the last bite of cake, we retreated to our tent. It rained with some intensity for the rest of the night. But the forecast we’d received just before leaving Vernal had indicating improving weather for the week, so we were hopeful that sunshine would eventually return (which it did 😄). Regardless of the weather, it felt GREAT to be outside on a river rather than stuck at home staring at a pile of unopened moving boxes! 😁