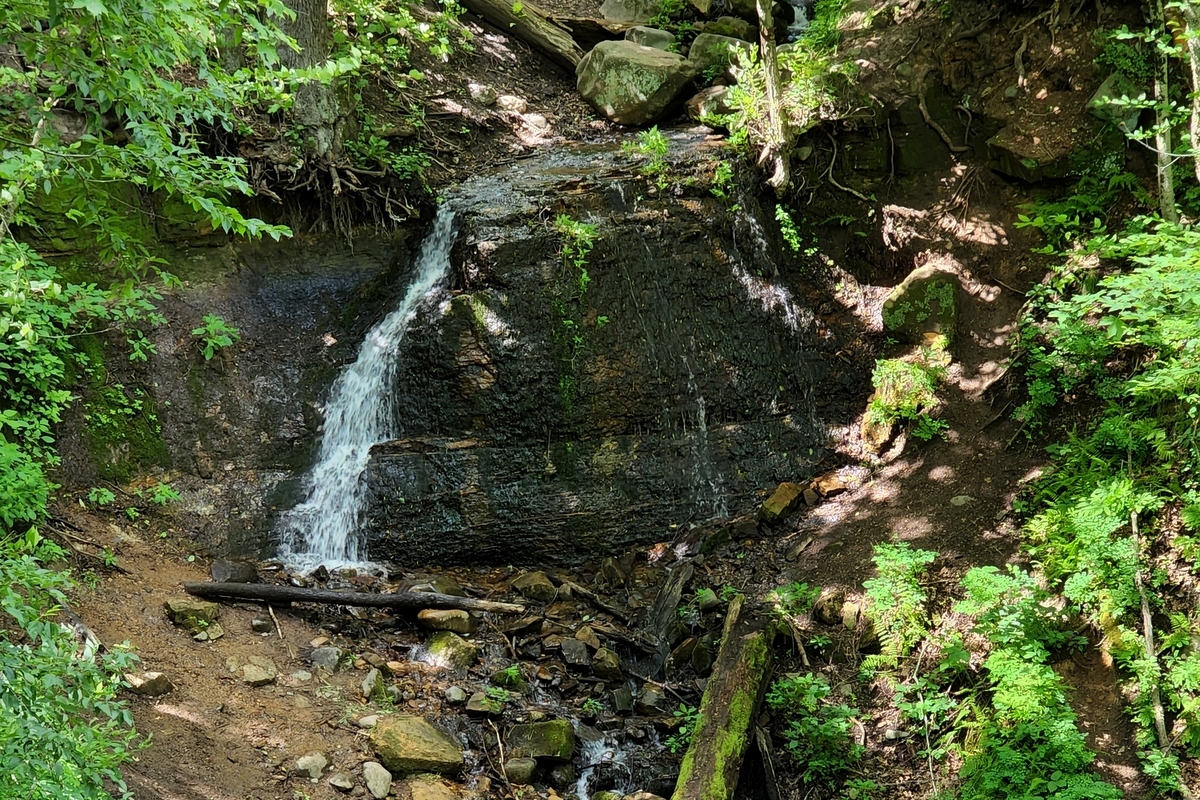 Last June, we paid a visit to the Minnesota part of Interstate State Park. But there’s a Wisconsin 🧀 part too. That part is Wisconsin’s oldest (1900) state park and the western terminus of the Ice Age Trail. Both parts straddle the Dalles of the Saint Croix River, a deep-sided gorge that river has worn through the basalt foundation strata. We wondered if there was any relation here to The Dalles, a town on the Columbia River in Oregon. No. We’d learn later that “dalles” is not a specific name but rather a general term describing where a river runs through a gorge – which the Columbia does just downstream of Oregon’s The Dalles.

Tomorrow we’re starting our second to last (❓) major DIY home fix-it project and felt we needed a hike to calm our anxiety over drilling large holes in outside walls (well, better now than in January 🙄). The Wisconsin side of Interstate (Hike #55 in 60 Hikes) offered a decently long walk to a waterfall, with a small lake and views of the Saint Croix included. We toyed with the idea of parking on the Minnesota side and walking over to the trailhead on Wisconsin side to save the $11.00 daily vehicle fee. Then we thought it would be better to pay for what we use (and enjoy). So we paid the fee and parked at the Ice Age Trail trailhead on the Wisconsin side.

We started out on the Horizon Rock Trail, which is also the Ice Age Trail until you reach the Skyline Trail. We followed that trail through the woods to the Pines Group Camp. From there, it was the Silverbrook Trail out-and-back, past an old mine, to the waterfall, Silverbrook Falls. The weather was ideal for hiking and – even without our new picaridin repellent – we weren’t bothered much by flying biting insects. 😄

We went almost around the lake to the Echo Canyon Trail and then climbed that trail past a rock formation known as the Old Man of the Dalles to the Summit Rock Trail and hence to the summit for a view north along the St. Croix to the hydroelectric dam – the only dam on this river.

Coming down, we thought we were on the main trail but were actually on a built trail that lead us down to the park road. So we just followed that road for the short walk back to the trailhead.

This hike came to 6.3 miles (10.2 km) with about 500 feet (152 m) of elevation gain, under near perfect weather for hiking. Considering that another wave of hot weather is forecast to strike this weekend (and into next week), our timing couldn’t have been better.😊

Although views of the St. Croix are a little easier to find on the Minnesota side, the combination here of forest, a waterfall, a lake, exposed rocks, and a summit view made for a very good hike! 😁 We topped off the day with a return to The Northern Lake Tavern in Chisago where the food and beverages were as good (and as reasonably priced) as before. 🌮🍺😋👍 Then, after stopping at the home store for just ONE MORE THING, we headed home to, once again, take up the DIY challenge. 😵