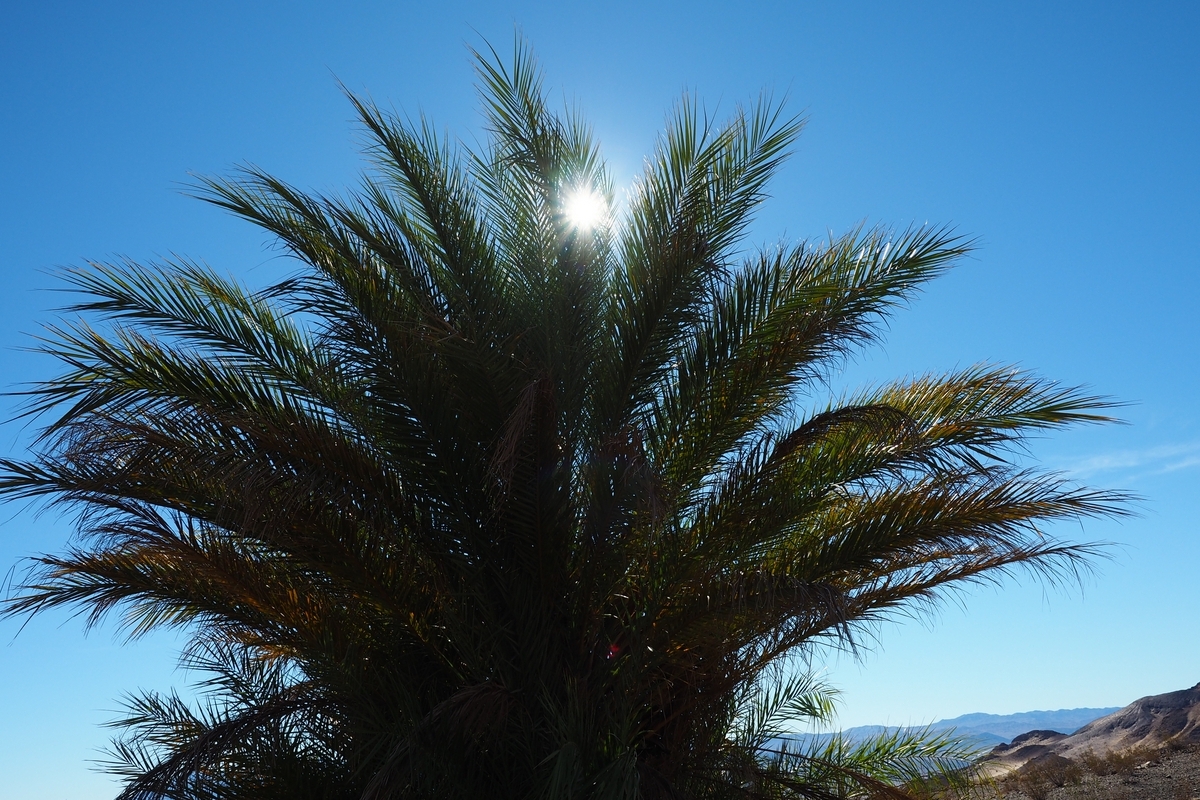 We had one more day of 4×4 available to us, so we decided to make Adventure #5 a visit to Saratoga Spring and Ibex Spring at the south end of Death Valley National Park. This proved to be a day of minimal hiking and much off-road driving. We could have gotten to Saratoga with a 2WD car but a high-clearance 4×4 was a definite plus for the short, but lumpy, ride out to Ibex.

END_OF_DOCUMENT_TOKEN_TO_BE_REPLACED

When we were tossing around possible adventures for our time in Death Valley National Park, Wayne and Diane mentioned that they’d always wanted to see Saline Valley, which is about 50 miles (80 km) northeast of Furnace Creek. I had been there once before in the mid-1980s; The LovedOne had never been there. Saline Valley is one of the most remote and hard to reach places in the park. While you can make it there and back in a 2WD vehicle (bring extra tires!), a high-clearance 4×4 increases your chances of not spending many unplanned hours stuck in the desert. Since we had access to a 4×4, why not go for a visit?

END_OF_DOCUMENT_TOKEN_TO_BE_REPLACED

Palo Duro Canyon is located in the West Texas Panhandle just east of Canyon and south of Amarillo.  It’s the second-largest canyon in the United States – roughly 120 miles long, with an average width of 6 miles, and a depth of between 820 and 1,000 feet.  It’s been called “The Grand Canyon of Texas” both for its size and for its dramatic geological features, including the multicolored layers of rock and steep mesa walls similar to those in the (real) Grand Canyon. Despite all this grandness, we’d never heard of it until The LovedOne stumbled upon it during one of her internet rambles. Backpacker magazine then ran a story on it in their March 2017 issue. Looked fascinating. So we made plans for a hiking roadtrip to go see it for ourselves.

END_OF_DOCUMENT_TOKEN_TO_BE_REPLACED

“…the first impression remains a just one. Despite variety, most of the surface of Death Valley is dead … a land of jagged salt pillars, crackling and tortured crusts of mud, sunburnt gravel bars the color of rust, rocks and boulders of metallic blue naked even of lichen.” ~ Edward Abbey

“No place is ever as bad as they tell you it’s going to be.” ~ Chuck Thompson

END_OF_DOCUMENT_TOKEN_TO_BE_REPLACED

We got an early start from Ketchum and had US20 pretty much all to ourselves as we went west toward its merge with I-84 at Mountain Home, Idaho.  US20 departs from I-84 from time to time between Mountain Home and Ontario, Oregon but we just stayed with I-84 through Boise, Idaho to Ontario.  Boise has become an increasingly interesting place to visit but not so much so early on a Sunday morning, so we skipped it this time.  After Boise, we crossed the Snake River after almost exactly 3,000 miles of driving and were home again in Oregon!  We picked-up US20 in Ontario, went through Vale (where the rain started up again), along the Malheur River to Drinkwater Pass, and then on to Burns, Oregon.

END_OF_DOCUMENT_TOKEN_TO_BE_REPLACED

The day got off to somewhat of a clear start – just some high, thin clouds – as we went west from Chadron.  Just beyond Chadron is Fort Robinson State Park, an historic cavalry fort that we’d visited before but we got to too early to visit this time.  After traversing miles of grassland dotted with cows, we crossed the Wyoming border at Van Tassell and joined I-25 at Orin, Wyoming.  We could finally see real mountains – the southern end of the Wind River Range – on the far horizon.  We took I-25 into Casper, Wyoming, along the route of four trails that fueled the westward expansion: Pony Express, Oregon Trail, California Trail, and Mormon Pioneer Trail.  The speed limit on I-25 is 80 miles per hour (not that anyone felt they had to go THAT slow…), so we reached historic downtown Casper in time for a large, amazing breakfast at Sherrie’s Place.

END_OF_DOCUMENT_TOKEN_TO_BE_REPLACED

The remnants of a Pacific tropical storm had finally reached the Mid-West and we awoke to a driving rain storm – and then spent the morning driving west through it. We weren’t allowed any respite from the rain until we reached the Ulysses S. Grant Home State Historic Site in Galena, Illinois. We stopped there primarily (OK, they had toilets too) to recognize the U.S. President that, despite a scandal-plagued administration, had the wisdom to create, in 1872, Yellowstone National Park.  We were here years ago to hike the Illinois state highpoint, Charles Mound (1,235 feet), which is northeast of Galena.

END_OF_DOCUMENT_TOKEN_TO_BE_REPLACED

It rained a little overnight but by morning it looked like we’d have another nice day like we’d had in Massachusetts. But patchy clouds had rolled over by the time we got to the Finger Lakes Region, with its prosperous little hamlets of Auburn, Seneca Falls, and Geneva. West of there, US20 alternated between two- and four-lane road and we made good time to Lancaster, New York, just east of Buffalo, New York. The rolling hills, small towns with their classic old houses, and forests in Fall colors made this a particularly attractive stretch of US20. We had lunch at the Broadway Deli (very good soup and salad!) in Lancaster and then followed US20 – slowly – through Buffalo’s eastern and southern suburbs. Then it was along the shore of Lake Erie (which you can’t see from US20) and into Pennsylvania. We entered Erie, Pennsylvania as its schools were letting out and rush hour was beginning, so we crawled through it, hitting stop light after stop light. We’d gotten through Springfield (MA) and Albany (NY) on the weekend, so this was our first experience with regular, weekday urban traffic on US20. The glacial pace we were forced to assume made us question the practicality of going urban on US20.