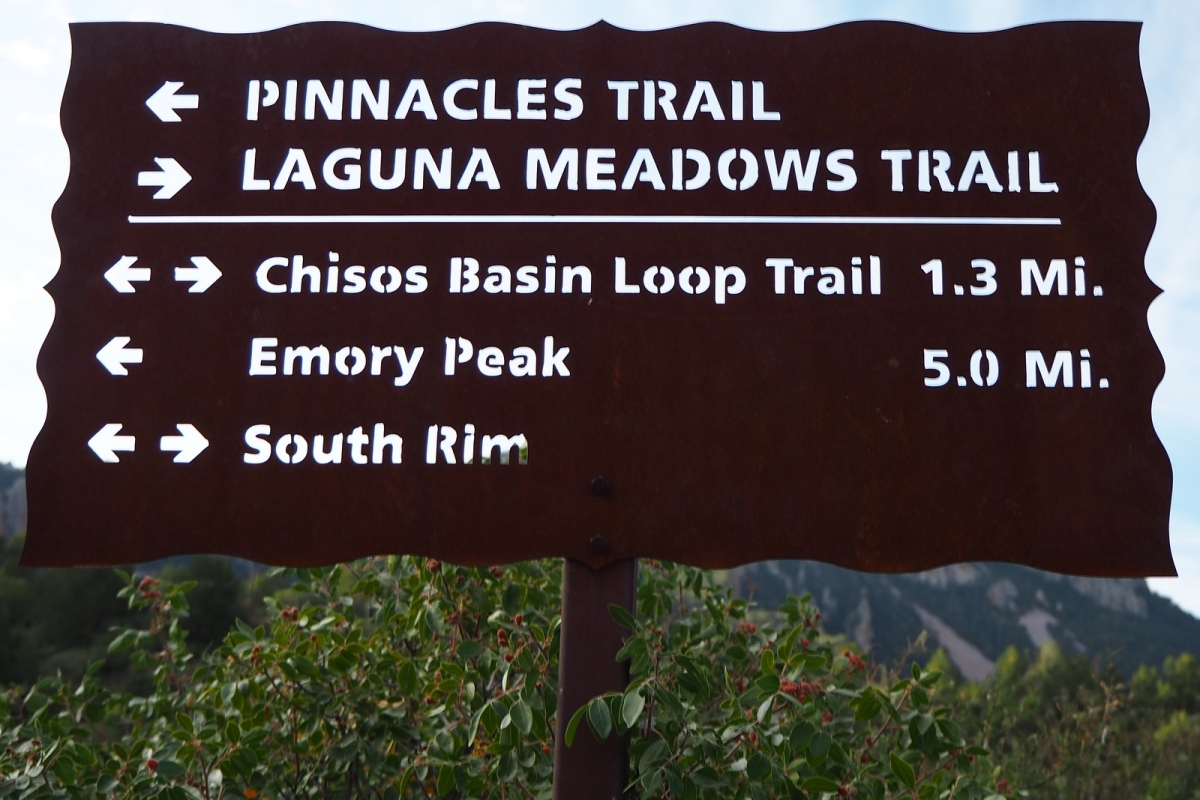 One of the classic hikes in Big Bend National Park is the loop from Chisos Basin to the South Rim, where one has a spectacular view south over Mexico. I was fortunate to be able to do this hike in 2014. This time the 12 plus miles it entailed was deemed too much for my still recovering body. But I wanted The LovedOne to experience the diverse forest (including Douglas fir, Aspen, Arizona cypress, Maple, Ponderosa pine, and Madrone) found high in the Chisos Mountains. So calling on my ever reliable tough and stupid ethos, I sketched out a shorter loop (only 9 miles with 2,000 feet of gain 🙄 ) up the Pinnacles Trail, along the Boot Canyon Trail, over the Colima Trail, and down the Laguna Meadow Trail.

I realized that this loop was stretching the hiking is good for your recovery thing to its limits (and possibly beyond) but I figured I could ask for forgiveness (and more pain meds) later. Fortunately, this hike went off without any issues for me and it was immensely enjoyable for The LovedOne – so win, win! We didn’t get the big southern view but we did enjoy the forest and encountered several Carmen white-tailed deer, a colorful rock squirrel, a roadrunner, and two black bears (a mother and yearling) on our journey. It proved the perfect (and unexpectedly exciting) way to wrap-up our visit to Big Bend. 🙂

Days 2 and 3 of our visit to Big Bend National Park found us wandering from the park’s west side to its east side to visit iconic canyons on both sides, as well as a small, but nonetheless charming, canyon in the middle. No hike was over two miles (round-trip), the weather cooperated wonderfully, and the scenery was excellent. As were libations and meals at the Chisos Mountains Lodge (never underestimate the small pleasures of having to neither cook nor wash your own dishes). Plus there were more menu choices than ramen and tuna (or tuna and ramen). 😉

A short (1.6 miles round-trip) trail took us from a paved parking area into stunning Santa Elena Canyon – where the Rio Grande River has carved its way through 1,500 feet of limestone strata. Trail guides rightly indicate that the necessary (but un-bridged) crossing of Terlingua Creek is not possible when the creek floods. However, the guides often fail to mention that crossing the creek where the trail meets it might also be impossible due to the incredibly thick and sticky mud on the creek’s bottom. We got around the creek’s sucking mud by going upstream until it petered-out, then made our way cross-country back to the paved steps on the official trail. From there we continued into the canyon until the canyon walls squeezed us almost into the river.

Diminutive Tuff Canyon runs alongside the Russ Maxwell Scenic Drive just outside of Castolon. It was formed when Blue Creek cut through a layer of bluish-white, welded volcanic ash (“tuff”). A short trail at the south end of the parking lot took us down into the canyon and then we ambled up and back along the drainage for less than a mile. A short, but scenic, little hike.

Boquillas Canyon is on the east side of the park, almost directly opposite Santa Elena Canyon. A short trail took us from the parking to the top of a cliff overlooking the Rio Grande. From there we continued down to the river’s edge and into the canyon until the trail was pinched-off between the canyon wall and the river. As we were leaving the trailhead, a gentleman went by on a horse and on up the trail. From the cliff overlook, we watched him swim the horse across the shallow Rio Grande and into Mexico (later we would see him do the same thing with a string of horses). This certainly says something about the historic porosity of the southern border. That absurd wall is going to need water wings here. 🙄

Five years ago, my brother-in-law, nephew, and I had done some hiking in Big Bend National Park. Our respective schedules dictated we do so in July – no crowds but damned hot! The LovedOne couldn’t join us then and had been agitating ever since to see Big Bend for herself. So we planned a trip there for early November, which is a much more temperate time for a visit. Then that medical issue came up and we feared we’d have to cancel (having failed to acquire travel insurance, that fear was palatable). But recovery was going well and many of the park’s trails are easy, so we went for it. Staying with the easier, shorter trails meant we visited parts of the park that we might have overlooked had we been focused on just the longer, more glamorous, trails. But then the whole park is glamorous in one way or another, so it was all good. 🙂

We flew to San Antonio, drove to Fort Stockton (a drive which reminded us of just how BIG is Texas), stayed overnight there, and got to the park around noon the next day. Casting around for a short, starter hike, we came upon the Grapevine Hills Trail, an easy (2.2 miles round-trip) one that leads to a group of balanced rocks in the heart of the Grapevine Hills. It proved to be an interesting destination in perfect hiking weather. And the hike was short enough to allow us to reach the Chisos Mountains Lodge (our basecamp) in plenty of time for libations and dinner. 🙂

As for our high point quest, that fizzled out several years later at 44 out of 48. The remaining four (Utah, Idaho, Montana, Wyoming [two attempts foiled by weather]) are among the hardest of the 48 and were ones we should have done first, during the full bloom of our youth. Ah, hindsight. Instead, we said “next year” one too many times, until a cocktail on the couch was more inviting than clinging to some cold, windy summit. Sigh. 😥 Post-dated note to self: make use of your youth while you have it… 😉

For our second hike at Palo Duro Canyon in West Texas, we zeroed in on what the  March 2017 Backpacker article had said about the big views available from Fortress Rim on the east side of the canyon.  The Rim is 800 feet above the Prairie Dog Town Fork of the Red River and from it you can see up and down almost the entire canyon.  Unlike yesterday, with its constantly shifting mix of clouds and sun, today was utterly cloudless and clear.  It was even a little cooler and less humid than the day before – perfect weather for taking in expansive views from the Rim.

END_OF_DOCUMENT_TOKEN_TO_BE_REPLACED

Palo Duro Canyon is located in the West Texas Panhandle just east of Canyon and south of Amarillo.  It’s the second-largest canyon in the United States – roughly 120 miles long, with an average width of 6 miles, and a depth of between 820 and 1,000 feet.  It’s been called “The Grand Canyon of Texas” both for its size and for its dramatic geological features, including the multicolored layers of rock and steep mesa walls similar to those in the (real) Grand Canyon. Despite all this grandness, we’d never heard of it until the LovedOne stumbled upon it during one of her internet rambles. Backpacker magazine then ran a story on it in their March 2017 issue. Looked fascinating. So we made plans for a hiking roadtrip to go see it for ourselves.

END_OF_DOCUMENT_TOKEN_TO_BE_REPLACED

This was the last full day of our week before 4th of July visit to Big Bend National Park in West Texas. My brother-in-law (Russell), nephew (Bart), and I had been using the Chisos Basin as a basecamp as we did several hikes in the area. To see some more of the park outside Chisos Basin, we planned a short hike – the Windows Trail – and then a drive over to the mouth of Santa Elena Canyon. We got another early start down the trail, enjoying the shady canyon and the cool down-canyon morning breeze.

END_OF_DOCUMENT_TOKEN_TO_BE_REPLACED

This was the third day of our week before 4th of July visit to Big Bend National Park in West Texas. My brother-in-law (Russell), nephew (Bart), and I had all arrived in the Chisos Basin – our basecamp for this trip – the two days before, had done our first collective hike yesterday, and so today was the day for a longer hike. We settled on the long loop out to the South Rim of the Chisos Mountains because its one of the longest hikes starting from the Basin and the views from the Rim were supposed to be sweeping (and that they were!).

END_OF_DOCUMENT_TOKEN_TO_BE_REPLACED

This was the second day of our week before 4th of July visit to Big Bend National Park in West Texas. My brother-in-law (Russell), nephew (Bart), and I had all arrived in the Chisos Basin – our basecamp for this trip – the day before and today was the day for our first collective hike. We picked the Lost Mine Trail because its being close to the Basin meant that we could get an early start without having to get up predawn to allow for driving.

END_OF_DOCUMENT_TOKEN_TO_BE_REPLACED

My brother-in-law, nephew, and I had talked for years about getting together for a hiking vacation but our respective schedules never meshed. With my nephew now teaching in Houston, and with none of us having been there before, Big Bend National Park seemed like the obvious choice. Although the week before 4th of July is not the most popular season in Big Bend owing to the high temperatures, it was the time our mutual schedules allowed. By going at this time and doing most of our hiking high in the Chisos (“Chee-sos”) Mountains, we avoided the really high temperatures, had the trails largely to ourselves, and still saw quite a bit of wildlife (Spring is the birding season in the park but there are still plenty of resident species).

END_OF_DOCUMENT_TOKEN_TO_BE_REPLACED

After the usual protracted negotiations, the family finally agreed to gather at The LovedOne’s brother’s home in Dallas, Texas for the traditional long weekend of gluttony and excess known as Thanksgiving. “Gather” is a bit euphemistic here since my brother-in-law saw it more like the Sack of Rome by the Gauls. Ah, perceptions. But the get-together was great as were the meals. Of course, after gluttony comes the necessary hike of redemption.