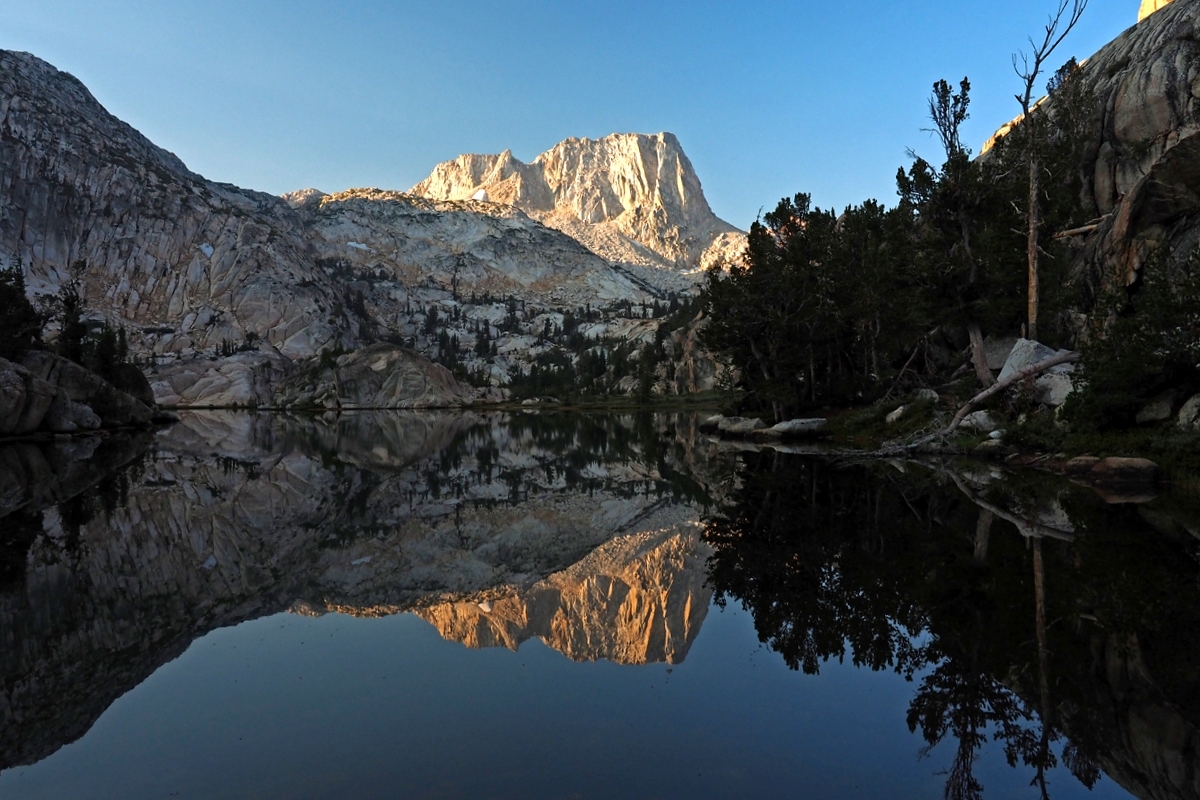 Overnight, the wind shifted yet again and the morning dawned not nearly as smoky as it had been the day before. Not completely clear but clear enough for some views of scenery on the way out. After breakfast, we headed directly down 7.1 miles to the pick-up point at the Robinson Creek Trailhead at Twin Lakes. All the other hikers, apparently being more spry, did a detour (uphill!) to Peeler Lake. While they were tromping around in the woods, we got to sit in chairs, drink cold beer, and play catch with Jethro the Wonder Dog. Seemed like a fair trade at the end of an especially adventurous and dramatic trip. 🙂

END_OF_DOCUMENT_TOKEN_TO_BE_REPLACED

If yesterday had been a study in crisp, bright clarity with the scenery resplendent around us, today was its exact opposite. We awoke into a smoke bank as thick as anything we’d yet experienced. The winds had shifted yet again and the smoke from wildfires to the west, north, and south was being driven right up Matterhorn and Slide Canyons. So not only did we have to two passes to cross, we were going to do so without much scenery to enliven the journey. 😦 But you play the cards you’re dealt so, after a good breakfast, we started our hike to Crown Lake in the Hoover Wilderness.

END_OF_DOCUMENT_TOKEN_TO_BE_REPLACED 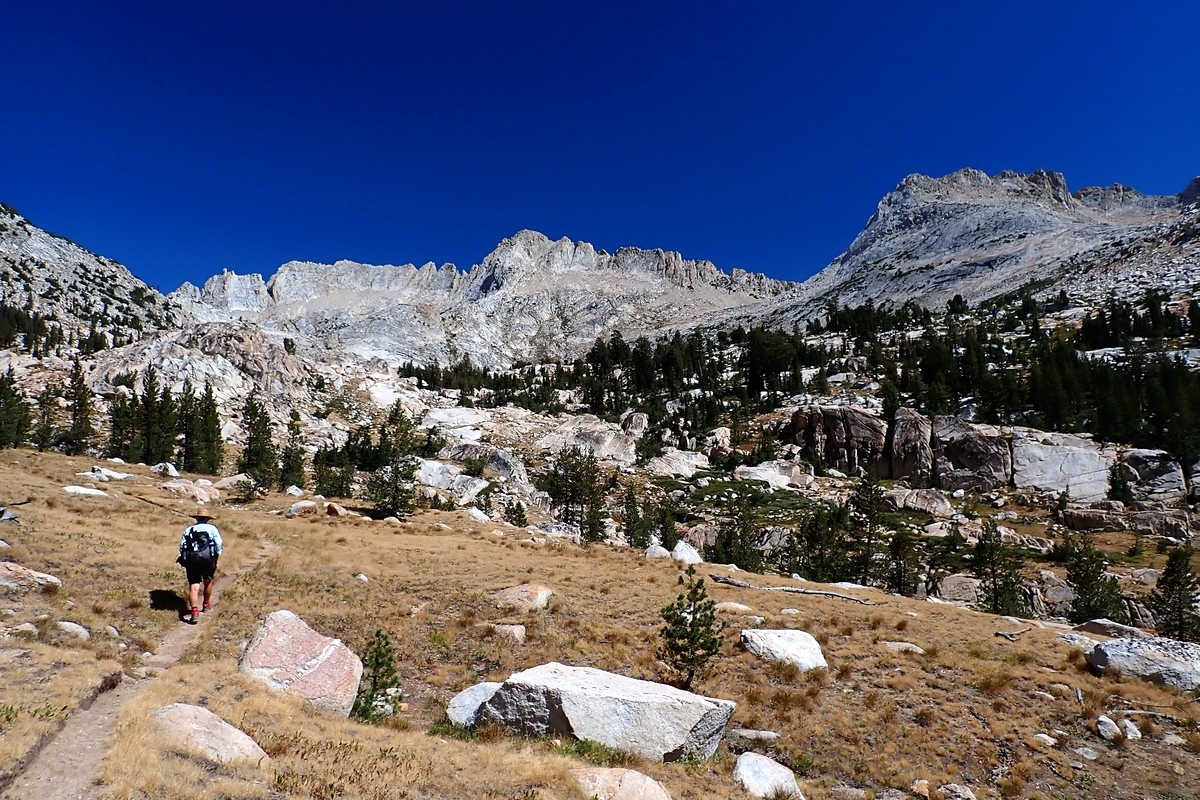 On our layover day, a stiff wind from the north had pushed almost all of the smoke away from Miller Lake. The wind had abated by evening, giving us a quiet night in camp – something we all needed after the drama of the previous 24 hours. Because of the unexpected layover, the trip’s itinerary had to be changed. So today we’d proceed as planned to a camp in Matterhorn Canyon then, the next day, cross both Burro and Mule Passes in one day to a camp at Crown Lake. So, with a plan in hand, we headed north on the Pacific Crest Trail (PCT) on a bright and clear morning toward Matterhorn Canyon. From Miller Lake, the PCT rises a bit before plunging some 1,400 feet down to a junction with the trail up Matterhorn Canyon.

END_OF_DOCUMENT_TOKEN_TO_BE_REPLACED

At 0300 on Tuesday morning, two Yosemite Search & Rescue (YOSAR) personnel (Jake and Erika) reached our camp, after having hiked 14 miles from Virginia Lakes in the dark with headlamps. The PLB had worked exactly as advertised – notifying the U.S. Air Force Rescue Coordination Center of our plight; they then notified the closest relevant authority, Yosemite National Park. The YOSAR personnel assessed Aniela (concluding that she didn’t have a head injury), communicated (they had a sat phone) her condition to dispatch, and then waited until morning to decide what to do next. At first light, the decision was made to stabilize Aliana’s arm (we’d later learn that she’d broken her radius and ulna and dislocated her elbow) and walk her out to Tuolumne Meadows. She made it out that day and was waiting to say good-bye to the group when we reached Twin Lakes a few days later.

END_OF_DOCUMENT_TOKEN_TO_BE_REPLACED 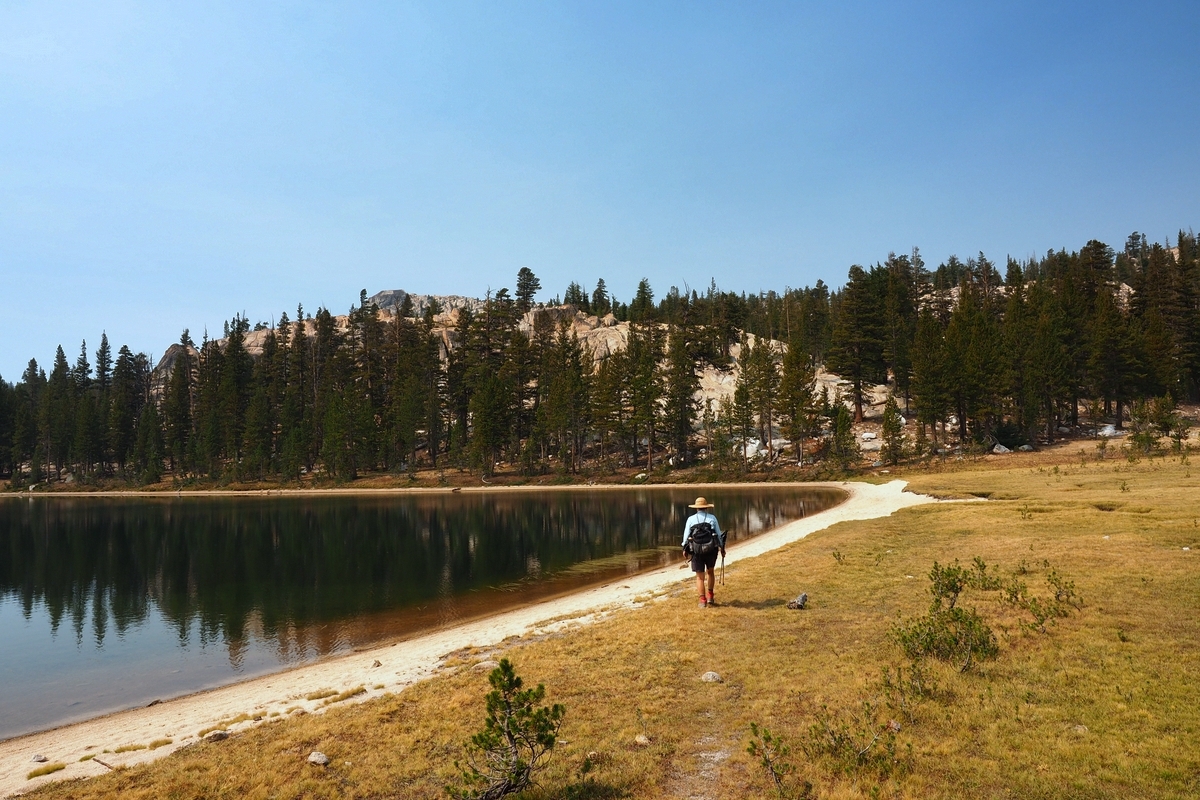 We went to bed at Avalanche Camp in Virginia Canyon bathed in a smoky miasma. We awoke to find that the wind had shifted in the night, clearing the air somewhat. Today was planned as a short hiking day (4.3 miles; 1,050 feet of gain) to a camp at Miller Lake – an even shorter hike than planned because we’d hiked an extra two miles the day before. After breakfast, we hiked a short way down Virginia Canyon to a junction with the Pacific Crest Trail (PCT). We followed the PCT westward across Spiller Creek and up numerous switchbacks to Miller Lake. Once again the LovedOne and I were ahead of the pack train but the large campsite on the southwest side of the lake seemed like an obvious packer campsite, so we waited there. The pack train arrived an hour or so later and we settled in to hang out and explore around the lake for the rest of the day.

END_OF_DOCUMENT_TOKEN_TO_BE_REPLACED 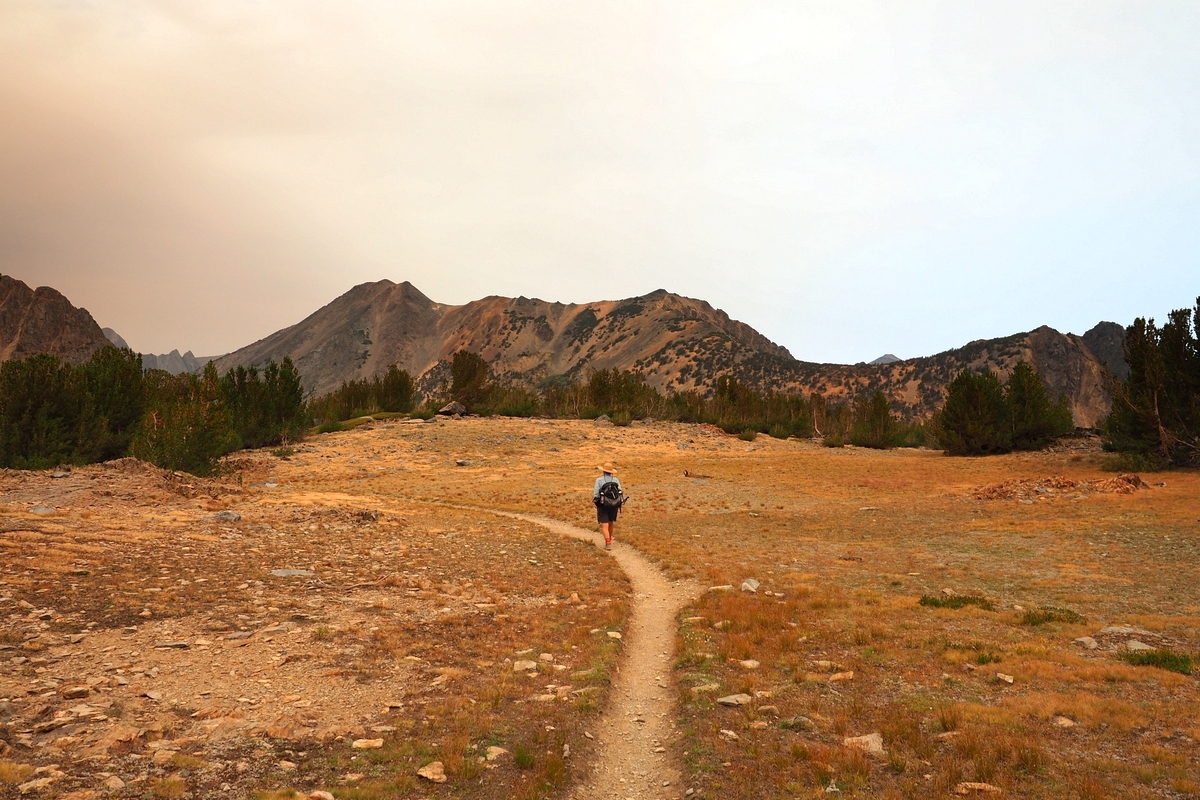 The day had finally arrived to start the one “big” trip that we’d managed to salvage from the (seemingly on-going) wreckage of 2020. Having been on several rafting trips, we wanted to try something new to us: hiking supported by pack stock. A friend of ours had alerted us to the Rock Creek Pack Station which runs a variety of mule-supported hiking trips along the Eastern Sierra. After some back and forth, we settled on a six-day introductory trip from Virginia Lake to Twin Lakes through the Hoover Wilderness, the northern part of Yosemite National Park, and the Yosemite Wilderness. For a variety of reasons, this trip would bring out the best and the worst of what it means to go deep into a wilderness area. It would not be, by any means, a simple walk in the park.

END_OF_DOCUMENT_TOKEN_TO_BE_REPLACED

In 1986, I was teaching a mountaineering class for the Sierra Club in Los Angeles. One of my students was a reporter for the Los Angeles Times. He offered to write a piece for the Times about a post-class mountaineering trip that we were planning. His editors gave him the go-ahead and then proceeded to find an outdoor photographer to accompany us on the climb. My reporter student called me up and asked if I’d ever heard of “some guy” named Galen Rowell and would he be able to do the climb? I literally dropped the phone (fortunately it was still attached to a cord in those olden days). Galen Rowell! One of the foremost photojournalists and mountaineers of his day! In fairness, my reporter specialized in foreign affairs and probably knew more about agriculture in Botswana than climbing and Rowell.

END_OF_DOCUMENT_TOKEN_TO_BE_REPLACED

Another year and The LovedOne is still not keen on having her picture taken. She has countered by hiking ahead of me (and faster) so as to stay out of camera range. Fortunately, subterfuge and deception allow me to get close enough, from time to time, for a photo.

END_OF_DOCUMENT_TOKEN_TO_BE_REPLACED

The other day The LovedOne brought home a small book from the “free” box at the library. It turned out to be a 5th Edition (1953) of Starr’s Guide to the John Muir Trail and the High Sierra Region (purchased from the still extant Vroman’s Books in Pasadena, California). The guide’s paper dust jacket was still in good condition, so it was somewhat of a rare find (at least for us trail guide geeks). Even rarer were the notes I found inside: Log of the John Muir Trail Hike by Gary Croan (August 1956). These detailed the backpack Gary’s Scout troop did along the Muir Trail that summer from Yosemite Valley to Florence Lake. Also included were his personal gear list and a brochure for Dri-Lite Foods, one of the pioneers in freeze dried foods.[1] His troop appears to have been based in the Los Angeles area, which meant they got to Yosemite Valley on [now old] Highway 99 since Interstate-5 didn’t exist in 1956. I’ve found brief notes in old guidebooks before, but this is the first set I’ve found detailing a backpack on an iconic trail in the days before permits and crowds and freeways. That he described the same backpack I did in August of 1972, sans scouts and going as far as Piute Creek, is a remarkable coincidence.  I am not, however, reproducing Gary’s notes here as some nostalgic paean to the “good old days” – as hindsight tends to accentuate the “good” and edit out the “bad” – but merely as a look at a young person’s outdoor experience in a now bygone era.[2]

END_OF_DOCUMENT_TOKEN_TO_BE_REPLACED

Although we’ve been to Yosemite National Park more than a few times since, the last time I can recall being on the valley floor was 1973. The LovedOne thinks she was there with her family ages ago, but can’t really remember. Neither of us had ever stayed at the iconic (and very expensive) Ahwahnee Hotel. So, as part of a recent roadtrip around various western national parks and monuments, we made a one-night reservation at the hotel and drove to Yosemite. The summer-time crowds and traffic jams in the valley are legendary (and becoming worse) but, thanks to our fortuitous arrival in a snow storm, we found the place remarkably uncrowded and quiet. Despite the cost, the hotel was a great experience, as was dinner in its huge, timbered dining room. It snowed all night but conditions were full bluebird by morning! After breakfast, we were able to enjoy a pleasant stroll to Yosemite Fall before heading-off to our next park.

END_OF_DOCUMENT_TOKEN_TO_BE_REPLACED

“Eventually, all things merge into one, and a river runs through it. The river was cut by the world’s great flood and runs over rocks from the basement of time. On some of the rocks are timeless raindrops. Under the rocks are the words, and some of the words are theirs. I am haunted by waters.” ~ Norman Maclean